The town where we are staying is small. We were looking for the land registry office today and we did not know where it was. It took us 3 minutes to find. Every time we find a patch of yellow on our BLM surface maps, it signifies a place we must checkout the outcrops to see what has weathered or is weathering from our precious slice of Hell Creek. It is courteous and right that we speak to all landowners before we blunder on to their land; hence we need to work through the land register each time.Once landowners have been contacted, we then packed our field vehicles and headed out into the Badlands. Metalled roads soon turn to gravel and then these to dirt. Soon we were off the maps, headed for our patches of yellow-mapped heaven in Hell Creek.

It never fails to amaze me how natural selection has overcome complex barriers to enhancing a species success rate and/or survival. The barrier in question today consisted various chemical cocktails, clothing, hats and Kevlar underpants. The pigeon-sized mosquitoes of South Dakota have ‘found a way’ (in true Jurassic Park fashion) of drilling through most barriers to extract your blood. They hunt in packs…and are far too affective. It would not surprise me that it was down to these blood-sucking females (the males do not suck blood!) that many a vast species has been driven to distraction…after the 50th bite, most crumble to gibbering wreck, as mad as a box of frogs. You think twice about bearing your arse to the world and relieving yourself in the Badlands, as you your rear-end will soon resemble a dart-board. As for pointing Percy at the porcelain, A) there is no porcelain to point at for 50 clicks and B) This would be far too good a target for any self-respecting mosquitoto pass-by. The thought of a direct hit in the wedding tackle, gives most field palaeontologists nightmares, given the voraciousness of these ambush predators. 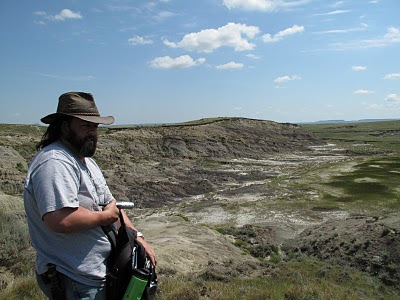 Today would be our first long, hot, hiking day in the sun. I love the smell of bug repellent in the morning! But alas, our repellent was about as much use a chocolate fireguard.

The first few sections we set foot upon had not been looked at for many years. We started finding bone almost immediately. Jason Poole was as keen as the rest of us to cut a pathway through the mosquitoes. Jason ‘Chewy’ Poole informed me today that his ‘press agent’ (also called Jason?) demands that I have to use the phrase ‘sexy beast’ after his name (I’m not sure if Jason Schein’s wife, Sarah, knows this!). Jason ‘sexy beast’ is quite a force of nature; George Lucas found inspiration for his Wooky character from the then 7 year old Jason…he must have needed to start shaving at 5 years old, but clearly did not. His flowing locks would put Fabio to shame…rumours of a hair-product deal are never far from Jason’s door! He is the anti-Christ of shaving foam, face balm and Gillette razors, but a thoroughly splendid chap. Fossils are more than just a past blast of an ancient landscape to our ‘sexy beast’, he loves to tease these disjointed fragments from the past into some semblance of life in the present…with a pencil. I’m not suggesting some proctological examination here, but our hairy friend is an accomplished artist...often from an unusual perspective... 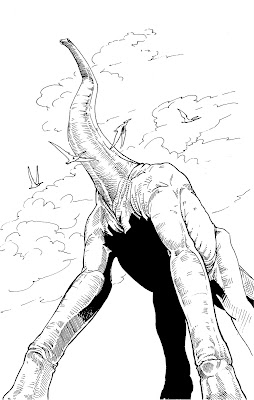 He has drawn dinosaurs from the frozen wastelands of Patagonia to the deserts of Egypt, but spends most of his time convincing kids they too are able to draw dinosaurs…he is still working on me! His daytime job in Philly has him chasing dinosaurs in the prep lab of the Academy of Natural Sciences, a job he clearly enjoys far too much. 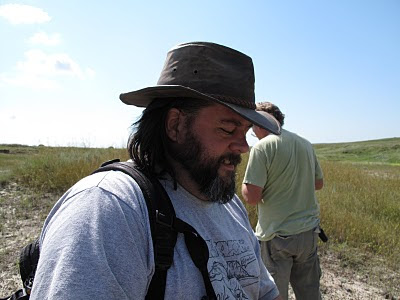 The delights of removing grains of silt…grain-by-grain, from dinosaurs bones would have most sane folks run screaming to the hills after 20 minutes…Jason disappears into his parallel-prep universe, with a worrying glazed look in his eyes…we move the sharp things away from him at this point.

The first ranch we explored had three sections of BLM land to ferret around in. Almost straight away, we started to find bone. By mid-day we had lost several pints of blood to the mosquito cohort, but we had mapped eleven new sites from a couple of potential Triceratops to several very productive micro-sites. The latter are sites that yield beautifully preserved teeth of dinosaurs, fish scales, occasional vertebrae and other such goodies. After a major hike, its great to find such a site, given we can all collapse and quietly pick through the 65 million year old debris. Soothing and satisfying....but not half as satisfying as the tyrannosaur claw we found below! 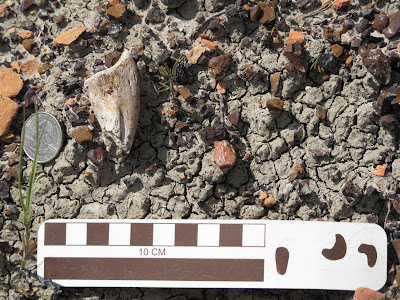 By the end of day one…we were all bitten and shattered. We staggered back to the field vehicles and sat silently in the welcome air-con of the car…how did those first settlers make-it through this harsh and unforgiving landscape. Now was the time to drink a cold beer, review the finds
Posted by Phil Manning at 23:31