Once upon a time, there was a big fat rat called Ming Hacller who lived in New York City. Ming the rat resided at one of the most prestigious addresses in the City,  79th Street and Central Park West. As a member of the Hacller family, Ming was a rat that loved to explore...not least through the stores and halls of the esteemed Museum in which he choose as his home. Alas, one-day Ming's wonderings came to an unfortunate end...ultimately landing himself pushing-up daisies...yes, Ming was a gonner, dead, shuffled off this rodent coil...this was an ex-rat. However, Ming was a tough old rodent, who simply refused to decay to dust...possibly his more healthy days in the presence of millions of stuffed and fossilized animals had left its mark on Ming. The usual processes of bacterial decay seem to have been halted by the rapid drying of his body... outpacing the bacterial decay. Ming was a smart rat, who really knew where to pop-his-clogs. His mummified remains did not go unnoticed...Carl Mehling spotted Ming's dried-up body and decided he was worthy of a place above Carl's desk...sat in an empty (albeit still regularly used) wine glass. I still worry that the missing tip of Ming's tail, might well be a function of a hastily poured, but absentmindedly quaffed glass of vino....

Sadly, Ming was a tad tired of his new sedentary, goldfish bowl-like life-style....and when a loan of fossils was being made to the University of Manchester Palaeontology Research team, Ming decided he might hitch a ride to see what they were up to! 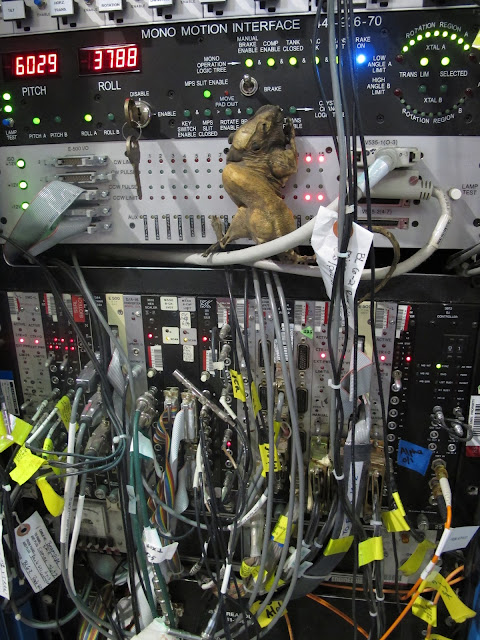 On arrival at SLAC, Ming escaped to explore his new surrounds. Sneaking past the team, Ming soon found that synchrotrons were full of useful highways that allowed him to climb into the spaghetti of cables controlling the beamline where the scientists worked. 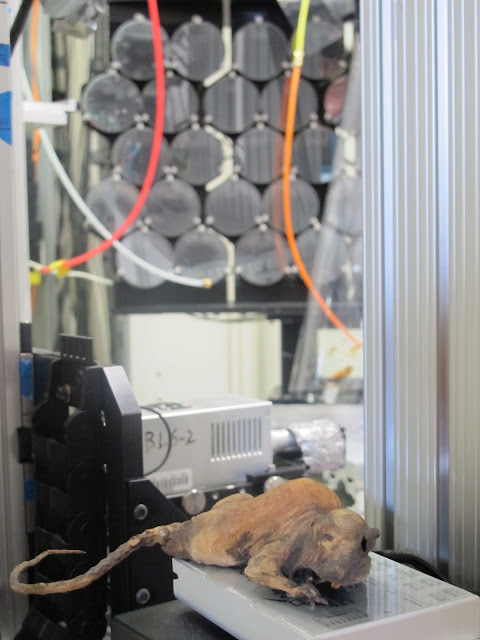 Clearly these scientists were a vain bunch. Wherever Ming looked, he saw mirrors...multiple ones. The scientists also seemed inordinately fond of stainless steel and aluminum foil...which the British members of the team kept insisting was 'Aluminium'.... 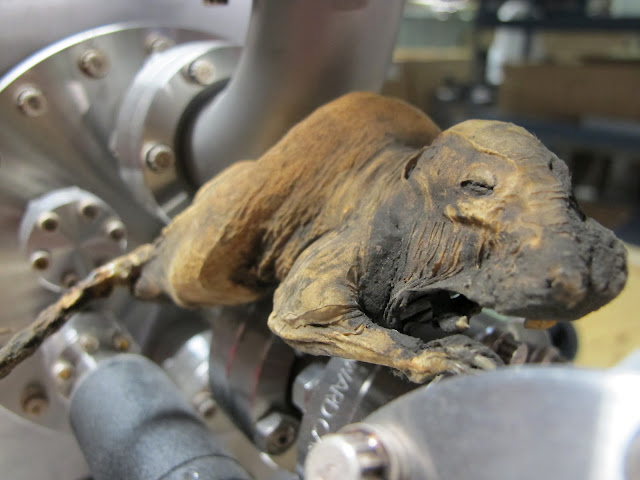 This was tiring work for a mummified rat, so like any self-respecting deceased rodent, Ming took a terminal nap on the beamline. Tomorrow we shall see if Ming makes it into the beam-hutch....and see what the scientists are working upon.
Posted by Phil Manning at 00:26 No comments:

Much time has passed since we have seen the light of day. Apparently, it is still sunny outside...but walking back to our accommodation at 3am...the sun was conspicuously absent. We have managed to run many samples with a much-reduced beam team (a mere five of us), given funding has been rather tight. We are trying our best to squeeze as much time as possible from the next few days we have left at beamline 6-2 at SSRL. 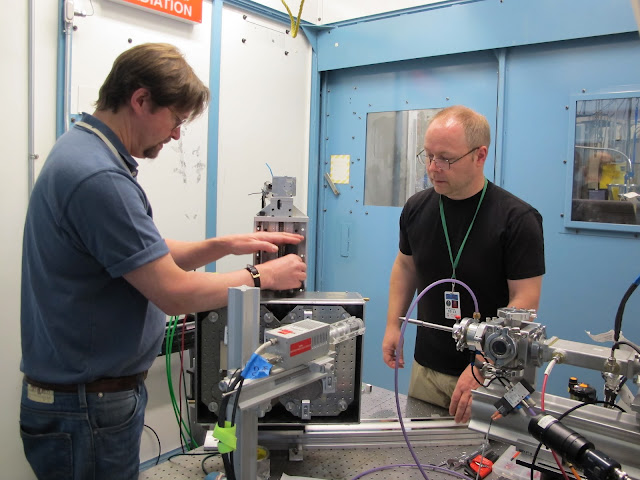 The samples have been relatively easy to mount (above, Roy Wogelius and I mount some fossils on the smaller experimental stage)...until we got to the largest fossil we have ever attempted to scan. A 60 pound (~30kg) monster of a fossil that needed mounting....on our experimental stage. 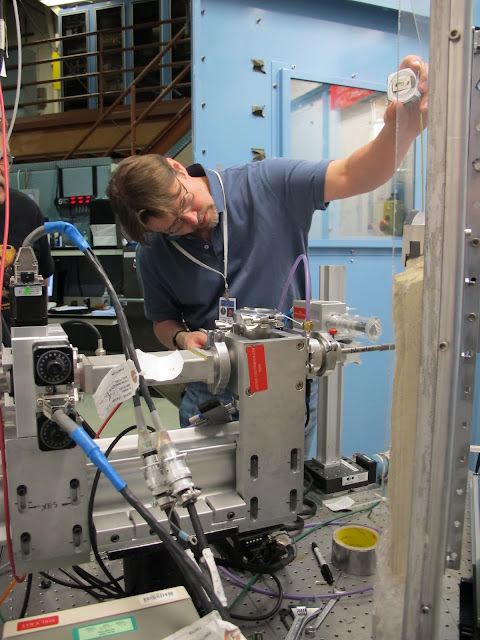 We had to place 40 pound counter weights on the back of the experimental stage to balance the accelerating fossil. Thankfully, our over-engineered stage coped with the inertia of our giant slab sliding moving too and fro in front of the 50 micron pinhole. This was a long....long...long scan, some 12 hours that our fossil gently moved from left to right in 50 micron steps, slowly giving-up its secrets locked in the sands (or in this case carbonate muds) of time. 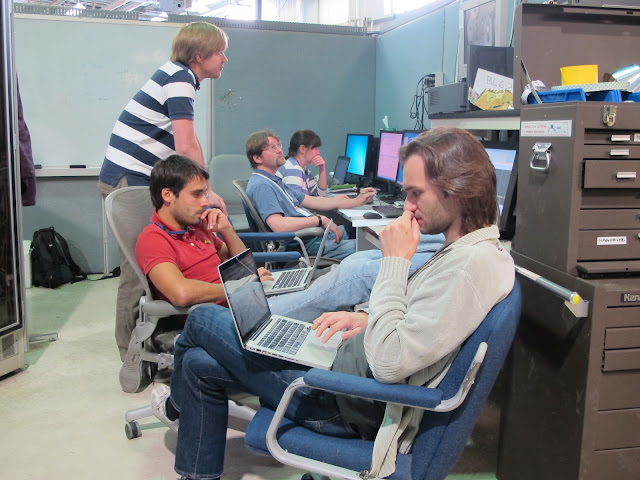 All we can do now....is wait and work. As our latest fossil skips the light fantastic in a beam brighter than a million suns.
Posted by Phil Manning at 08:54 No comments:

Once more into the concrete bunker...

Working at a synchrotron usually involves being below ground level, surrounded by concrete, serenaded by the hum of energy and crushed by the absence of sleep. The 8-hour shifts often merge into 24-hour days whilst the timeless hum of relativistic electrons fills the air. Tomorrow, the University of Manchester team will start building another experiment on beamline 6-2 at the Stanford Synchrotron Lighsource. This is the only beamline on the planet where we can rapid scan GIANT objects (certainly in terms of synchrotron-based imaging), to tease their elemental signatures from their multi-million year old tombs. Many folks might think it was possible to undertake such work on simpler and more easily accessible equipment, such as the Scanning Electron Microscope (SEM)....however this would involve slicing-up your object, reducing spatial resolution and sensitivity (some elements you can only map with synchrotron light!), besides...you would need 48,000 hours of SEM work to achieve what we can do in a few hours on a synchrotron.
We will also start experiments later this year at the Diamond Lightsource, this being the UK's newest synchrotron lightsource. This work will continue to build-upon our prior work on feathers at SSRL... because there are plenty of other fossil-types to be elementally plumbed!

Posted by Phil Manning at 03:00 No comments:

Today was splendid! When we finally arrived in New York....via a GPS induced scenic tour of New Jersey, we arrived at the American Museum of Natural History (AMNH). Carl Mehling greeted us all at the entrance to the museum and led us through the vast complex of corridors, elevators and exhibition areas...leaving little chance of us to orientate ourselves in the maze. 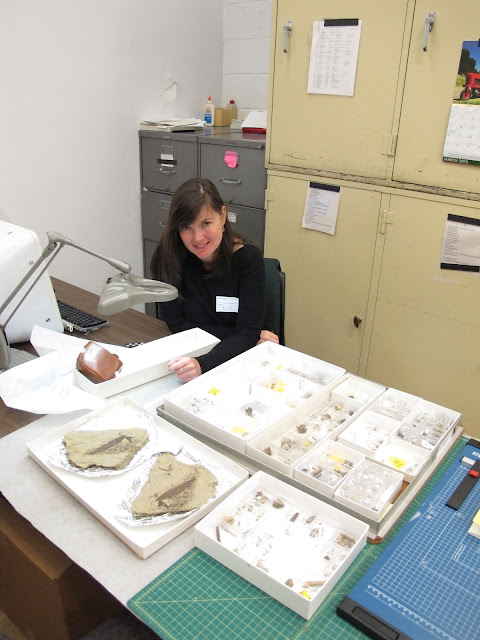 Dr Egerton (Jnr.) got started on working through our fossils collected last summer, while Dr Egerton (Snr.) explored the galleries of the AMNH. Leaving the Drs Egerton, I disappeared to find the AMNH paleontology collections manager to discuss excavations, loans, synchrotrons and suchlike...but then, haloed in a stream of light from flicking fluorescents was a cup of sheer delight, right at eye level, lidless eyes were starring back at me (with no eye-balls to boot!), for there I spied cupped in delicate wine glass perched on a shelf above Carl's desk, the mummified remains of a rat! Assuming that Carl did not intend to drink the said desiccated rodent, I realized I was staring at a potentially useful experiment....one that involved the mummified remains of the AMNH rat and a particle accelerator.... 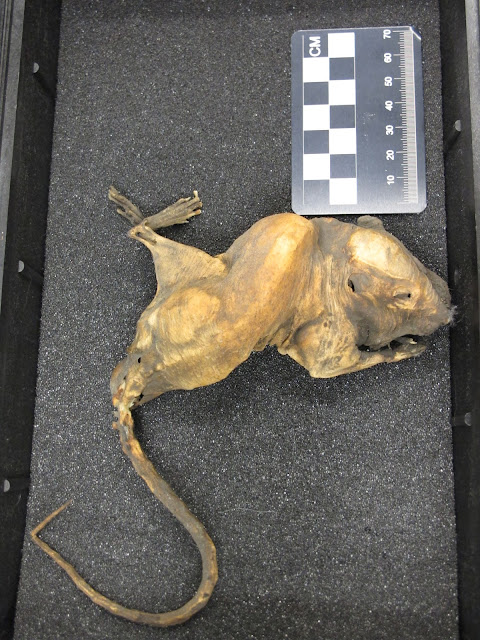 As I cupped the weightless remains in my hand, you could see that Carl was very proud of his mummified rat...as well he should be! The tale of this particular rat will be broadcast on later blogs....fun!

Posted by Phil Manning at 02:47 No comments:

A day at the 'Night at the museum'...Museum.

Today I was in Philadelphia. My stop in Philadelphia was to dispatch my duties as a committee member for a PhD student at the University of Pennsylvania, who had his PhD proposal defense today. The student splendidly displayed his knowledge and understanding of ceratopsian dinosaurs...not a surprise, given he is supervised by Professor Peter Dodson...the ultimate 'ceratophile'.

Tomorrow morning, bright an early, I will make the trip from Philadelphia to New York. The 'Big Apple' is host to one of my favourite places on Earth, The American Museum of Natural History (AMNH). Many of you will be familiar with its grandiose exterior, from the Hollywood blockbuster, 'Night at the Museum'..which I might add was not filmed inside the hallowed halls of the said institution...the interior shots were filmed at a specially constructed set for the movie!  However, I am sure the film hooked many visitors into the real Museum which is located just off Central Park.

Whilst the AMNH plays host to some 5 million visitors every year....sadly the exhibit remains un-animated after dusk...as far as I know? However, behind the public exhibition area lurks something even more exciting than an excitable Genghis Kahn or roaming T. rex... here lies one of the most incredible natural history collections on the planet...one that I am pleased to say the University of Manchester team has been donating fossils to over the past year or so.

The fossils that we have donated, coupled with some borrowed from the AMNH collections, are being studied at the Stanford Synchrotron Radiation Lightsource (SSRL: California) and also at the Diamond Synchrotron (Oxford, UK). My trip tomorrow is to work-out a strategy for which fossils will be placed on the synchrotron x-ray 'spit' on our beam runs in May (at SSRL) and July (at Diamond). Such decisions are always tough, but are fundamentally driven by science...the more we can unpick from lost worlds and forgotten lives, the better.

While the powerful gaze of the synchrotron sheds new light on some very old fossils, in a way...we too are animating a bit of the past...albeit without the aid of Ben Stiller and Hollywood. So, next time you watch a heart-pounding movie with dinosaurs chomping their way through a cast of stars....spare a thought for the museum collections that house the precious fossils from which such stories are crafted.
Posted by Phil Manning at 03:44 No comments: