A Pigment of our Imagination? 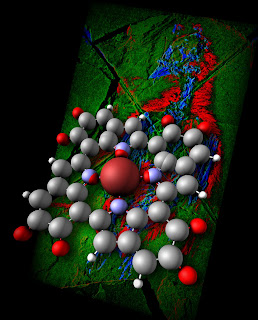 Trace metals as biomarkers for eumelanin pigment in the fossil record.
Today we publish our most recent research in Science Express (the online arm of the journal Science). Our team has been able to show a remarkable relationship between copper and pigment within exceptionally preserved fossils of feathers and other soft tissues.

Fig. 1. False color chemical image (left) of an approximately 120 million year old fossil of Confuciusornis sanctus, the oldest documented avian species to display a derived beak, with superimposed model of a eumelanin-copper chelate complex. The image was produced using synchrotron rapid scanning X-ray fluorescence. In this image red corresponds to copper and the distribution of this metal shows the patterns of original eumelanin pigments in this extinct species, thus allowing a reconstruction of pigment shading. Blue corresponds to calcium in the fossil bone, and green is zinc within the sedimentary matrix.

Pigment is a critical component of colour. Our team can map the presence of pigments over whole fossils, revealing original colour patterns (but through a monochrome filter). Our findings indicate that pigment chemistry holds the future key to the ultimate goal of discovering the full colour palette of past life, from dodos to dinosaurs and beyond.

Colour has played a key role in the processes of evolution by natural selection that have steered all life on Earth for hundreds of millions of years. Whether this be sexual selection or camouflage, colour and patterning plays an important role in the struggle to pass one's genes to the next generation....else many top clothing brands would be bankrupt, given our own species desire to look gorgeous! 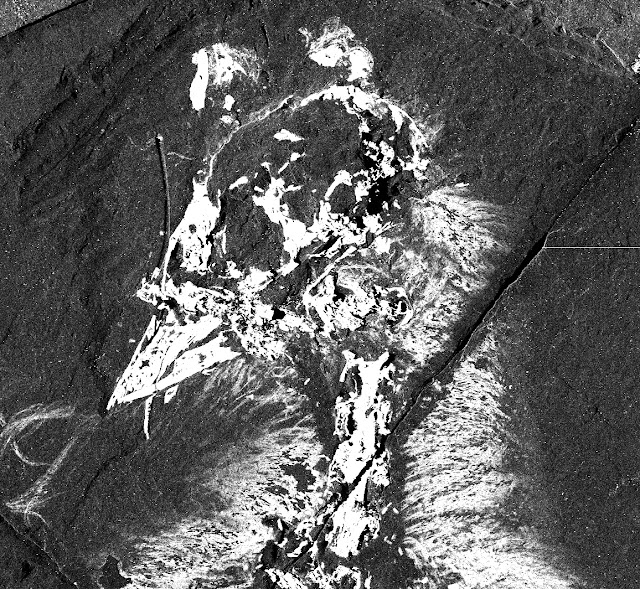 Fig. 2. Synchrotron rapid scanning x-ray fluorescence image of the calcium distribution in a fossil specimen of Confuciusornis sanctus, an ~120 million year old avian species, the oldest documented to display a fully derived beak. Calcium is high in the bones as shown by the bright white areas, but calcium is also high in the areas corresponding to residue of downy feathers in the neck region. This is interpreted to be due to the distribution of calcium being controlled by eumelanin chelates in the neck feathers, indicating that these soft tissues were originally darkly pigmented.


This unique scientific breakthrough can allow paleontologists and biologists to reconstruct pigment patterns in extinct and living animals respectively, as well as provide an understanding of the way in which biological compounds are preserved in specific environments through geological time.

This could provide a far greater understanding of the feeding habits and environments occupied by extinct creatures, as well as shedding light on the evolution of colour pigments in modern species. Here the data from living species was so crucial to deciphering the chemical code locked in deep time.

Fig. 3 (Left) Collage of images. Top, optical images of: blue jay feather, squid, and fossil fish with feather. Bottom: x-ray images showing the distribution of copper (red) in the same organisms. Copper in the dark parts of the feathers, the fish eye, and the squid ink sack indicates the presence of eumelanin pigmentation and in combination with other elements can be used to map pigment distributions in fossils and existing organisms.


The X-ray team, led by Dr Roy Wogelius, Dr Uwe Bergmann and yours truly (‘Dr Phil’), took the unique approach of using the super-bright x-ray light of a synchrotron to analyse the soft tissue regions of fossil organisms. The application of X-ray physics to palaeontology has shed new light on this tangled tale of prehistoric pigments in deep time and how to map and recognise specific chemistry in fossils that are hundreds of millions years old. Roy Wogelius, lead author on the paper and University of Manchester geochemist, said: “Every once in a while we are lucky enough to discover something new, something that nobody has ever seen before. For me, learning that copper can be mapped to reveal astonishing details about colour in animals that are over 100 million years old is simply amazing. But even more amazing is to realize that such biological pigments, which we still manufacture within our own bodies, can now be studied throughout the fossil record, probably back much further than the 120 million years we show in this publication.”


To unlock the stunning colour patterns, the Manchester researchers teamed up with scientists at SLAC National Accelerator Laboratory (USA) and used the Stanford Synchrotron Radiation Lightsource to bathe fossils in intense synchrotron X-rays. Also working on the synchrotron team were Pete Larson, Holly Barden, Nick Edwards, Bill Sellers and not forgetting SLAC's Sam Webb. As I have mentioned before, this type of experiment runs 24 hours a day for a week…so is the ultimate sleep deprivation study. Without a large support team of colleagues, we could not undertake such exciting research. Several other team members made major contributions to the acquisition of material and its analysis back in Manchester.
The key to their work was identifying and imaging trace metals incorporated by ancient and living organisms into their soft tissues, in the same way that all living species do today, including humans. Eumelanin pigment has a copper atom at its structural heart, allowing us to map its presence, via its distinctive signal. Eumelanin is possibly the most important pigment in living species and our study clearly identified this pigments presence and distribution in several extinct species. We can now use this copper-coordinated molecule to help unlock the pigment palette of man other extinct species. 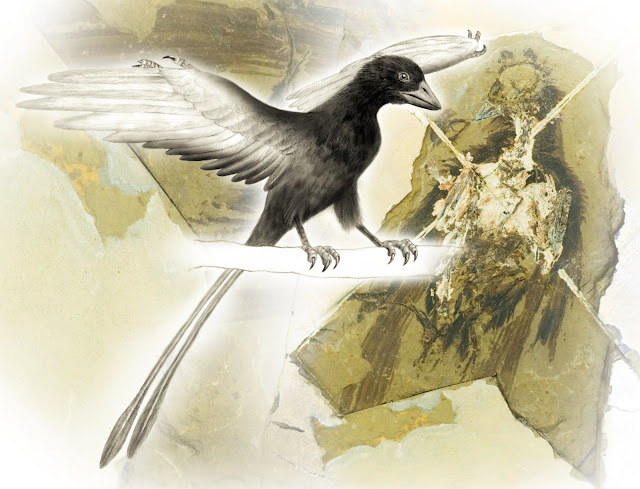 Fig. 4. (above) Shown here is an artist’s conception of the pigmentation patterns in Confuciusornis sanctus, an ~120 million year old species, the oldest documented to display a fully derived avian beak. Patterns are based on chemical maps of copper and other trace metals in several fossils of this organism. Trace metals, copper especially, are found to exhibit patterns which reveal eumelanin pigment distribution in the living organism. In the background is a picture of one of the fossils used to derive the artist’s drawing. Drawing of C. sanctus is by Richard Hartley, University of Manchester.


It is fair to say that the fossils we excavate have even more potential to unlock secrets on an organism’s life, death and subsequent events impacting its preservation before and after burial. To unpick this complicated chemical archive that fossils represent, can only be achieved through the hard work of multidisciplinary teams that can bring in to focus many areas of science. In doing this, we can unlock much more than just palaeontological information; we now have a chemical roadmap to track similar pigments in all life.

Our results clearly show that chemical remnants of pigments may survive even after the melanosome (biological paint pots) containing pigment has been destroyed. Some of the samples they publish clearly preserve a chemical fossil, where almost all structure has been lost in the sands of time. The chemical residue can be mapped to reveal details of the distribution of dark pigment (eumelanin), probably the most important pigment in the animal kingdom.
This pigment gives dark shading to human hair, reptile skin, and bird feathers. Using rapid scan X-ray fluorescence imaging, a technique recently developed at SLAC, our team was able to map the residue of dark pigment over the entire surface of a large fossil, for the first time giving clear information about fundamental colour patterning in extinct animals. It turns out that the presence of copper and other metals derived from the original pigment gives a non-biodegradeable record of colour that can last over deep geological time.

Uwe Bergmann, SLAC physicist and co-author on the paper said: “Synchrotron radiation has been successfully applied for many years to many problems. It is very exciting to see that it is now starting to have an impact in palaeontology, in a way that may have important implications in many other disciplines. To work in a team of such diverse experts is a privilege and incredibly stimulating. This is what science is all about.”

Using this novel method to accurately and non-destructively measure the accumulation of trace metals in soft tissues and bone, the team also studied the chemistry of living species, including birds. Roy Wogelius added: “This advance in chemical mapping will help us to understand modern animals as well as fossils. We may also be able to use this research to improve our ability to sequester toxic materials such as radioactive waste and to devise new strategies for stabilizing man-made organic compounds”.

The synchrotron at SSRL has been used for many years to probe the innermost workings of molecules to an almost impossibly small scale. The team from the University of Manchester and SSRL has shown it is possible to retain the sensitivity and probing ability of the synchrotron, whilst working at a much larger scale (these fossils are giants in terms of synchrotron samples). The information gleaned from the current study is way beyond anything we could have dreamed of a few years ago.

The potential for this technique to gently un-pick the chemistry of long extinct species is quite breathtaking. The possibility of mapping biosynthetic pathways, enzymatic reactions and mass-transfer of elements between organic and inorganic systems through deep time...offers many areas of science, not just palaeontology, cracking insight to the past. More importantly, the hindsight that the fossil record provides will undoubtedly have benefits for understanding Earth processes, both today and in the future. Advances in one field are often the function of a curve ball from another.


Take a look at our podcast on the Science web site, just click HERE to link to Roy and I talking about this research.


A final reminder that 'In Living Colour' will be transmitted on the National Geographic Channel in the USA at 10pm EST on Thursday July 7th. You can watch Uwe, Roy and I...along with many other folks in our team, take a close look at colour in the fossil record.
Posted by Phil Manning at 19:03