Flying is not my favourite thing. Given my work often entails getting to the middle of no-where…planes are usually involved. The relatively vast airport of San Diego is another planet when compared to Rapid City. If there was ever an airport that I could call my favourite, it would be this one. Once off the plane you walk a hundred years to the exit, down an escalator that almost deposits you in front of your baggage. Whilst waiting a few minutes for your luggage, you can just turn 180 degrees and talk to your car rental agent. All is simple, smooth and hassle-free…I only wish that all airports were still like Rapid.
Bill Sellers was already waiting for us in the airport, as he had arrived on a slightly earlier flight. His eyes were red with lack of sleep. He has been up for nearly 24 hours. I had already met Victoria Egerton, Jason Poole and Eric Morchhausser had met me en-route in Denver, my stepping-stone from San Diego. Once we had all our bags and belongings, plus sorted the car rental, we set-off outside, where we met the last member of our team, Jason Schine. He had been working in Montana these past two weeks and was to join us for the first few days of our fieldwork. We were all tired, but jumped in our two field vehicles and set-off to Hill City, where we were to stay the night at Pete Larson’s house.
Pete’s house is simply stunning. It precariously hugs the rocks on a small peak between Hill City and Keystone. He built the place with his bare hands and with a great deal of jack-hammering, timber and determination. We were given the usual warm welcome and a cold beer. We all went to sleep very quickly, as we knew tomorrow would be a long day of sorting supplies, maps, getting permits signed and sorting out the field station.
We all woke and were up and supping coffee by 7am and at the Black Hills Museum ogling at dinosaurs by 8am. Here is the home of ‘Stan’ the T. rex, excavated in the early 1990’s by the Black Hills Institute, where Peter Larson is the president. Pete gave one and all a guided tour of the Museum and its collections and also of the workshops where his company makes stunning casts of the bones of Stan, such as the mount you can see at the Manchester Museum and countless others around the world. The Museum is situated in Hill City, just near Mount Rushmore. Here is a museum that has not forgotten that the fossils are the stars…this Aladdin’s Cave of prehistoric life warms the cockles of my heart every time I see them. The converted music hall is like Dr Who’s tardis meets carnival of the dead-animals, with every inch of space occupied. The real fossil bones of Stan the T. rex…and several other Cretaceous & Jurassic colleagues of his, tower over visitors to the Museum. Gasps of ‘Wow, that’s awesome’ and ‘Look at the size of that critter’ are often muttered in hushed reverential tones, unlike when the same folks see Mount Rushmore and say, “Wow, isn’t that small?”. 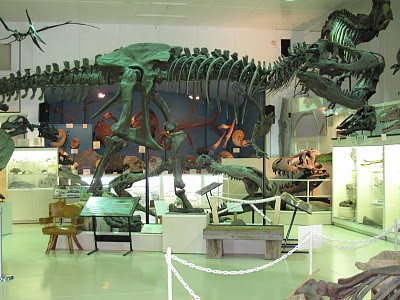 Collecting our bags and belongings together, we set-off from the Black Hills. We were driving north to the Hell Creek deposits of South Dakota. The final leg of our long journey was nearly at an end. Several hours later, we had already been to the BLM office to get our permit signed and activated, then at the end of another long drive, we arrived at our facility that was to be our field station for the next two weeks. The drive over the prairie was one that I thought I would never see…it was green! In the ten years I have been coming to the USA, there has been a dreadful drought affecting the mid-West. Last year, the rains came and this year they have continued. The long, deep green prairie stretches as far as the eye can see. Ranch fences, ponds and small creeks break the monotony of the grasslands. Pronghorn antelope are common, but you have to be fast to spot them before they bolt at impossible speeds across the landscape. These graceful animals have the pace and timing of Olympians, as they sprint ‘through’ barbed-wire fences, not over or under, but between the wires at full steam. The grace with which I pass over or under such fences being at the other end of the graceful-spectrum…more like a clown trying to make something look as difficult or dumb as possible.

As we opened the car doors, a subtle but distant smell of sagebrush greeted us, as did a swarm of hungry mosquitoes the size of pigeons. We were back in the Badlands.
Posted by Phil Manning at 16:07