As you have probably guessed by now that I’m using this Blog to introduce you to the members of this years South Dakota field crew. The fun thing with palaeontology, we are all different…some more different than others. These past two days have been a tad busy, so my apologies for a slow upload of events, besides…trying to find WiFi in the Badlands, is a bit like trying to find a lost contact lens in a swimming pool. 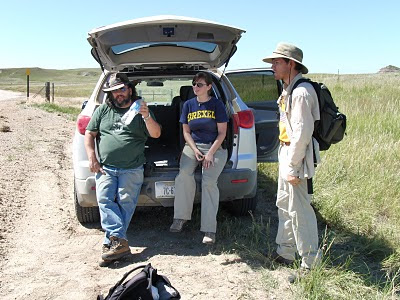 We have trawled several new localities these past two days, all yielding dinosaur bone, but some richer than others. Today’s biggest find was made by Eric Morschhauser, our University of Pennsylvania PhD student team member. The said bones were from a rather hefty Triceratops in the Upper most portion of the Hell Creek Formation. There was plenty of bone poking out from a relatively low butte, meaning there will not be too much overburden to shift when we come back to this site next year. As this is exactly what we intend to do (funding permitting!). The bones exposed were recognizable and in pretty good shape, which is often a good indicator of things to come. After much slobbering over the bones, we carefully covered the site to avoid prying eyes…even though we were in the middle of nowhere, just for a change. 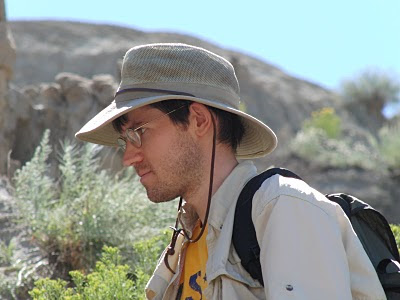 Eric Morschhauser was just the right person to stumble over his 65 million year old Triceratops, as his PhD is studying these beasties and its ancestors (mostly from China). You might say that Eric is your typical PhD student, very keen…no I mean VERY keen. He is bright, articulate and as fond of dinosaurs as any member of the field crew. He cut his dinosaurian teeth at Montana State University before heading East to UPenn, but has settled well into the rigours of scholarly research. Eric is now formally a ‘Dodsonite’, in other words a student of Peter Dodson, who knows almost all that a soul should know about horny animals in the Cretaceous, or Ceratopsians to fellow palaeo’s. Peter Dodson is one of the main reasons why I shall be spending much of my sabbatical at Penn. His wealth and generosity of knowledge is only surpassed for his appetite for good food and well-kept beer.
After a few nights of roughing it at the field station, we decided to seek comfort in a real bed and a shower that was not shared by various things that bite and sting. We all piled into our SUV and headed into town to find a suitable hostelry that would take in our motley field crew. As we arrived at the Motel, we took a look at each other…not a pretty site! I was smelly, dishevelled and unshaven, the same could be said for the whole crew…bar Victoria, who did not need a shave! “What will this Motel manager make of us lot” I asked…Jason suggested we might be mistaken for a rock-band…Eric interjected that he “was the cute one”. However, Eric’s boyish looks are slowly evolving into the ‘palaeo-mountain-man-look’, he is now sporting several days stubble…that will soon flourish into a manly ‘un-cute’ beard! We’re not sure that his wife will recognize him when he returns to Philly, but she has prior experience of ‘Hairy Eric’ from their recent trip to a razorless China. We’re learning more about Eric as the fieldwork progresses. 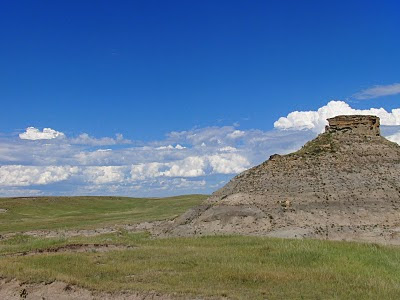 Sleeping on a bed, after a week on a roll-mat and sleeping bag is utter heaven. To also have a shower that was ‘yours’ and not shared by the whole field crew (not at the same time I might add) is utter luxury. Not to be bitten my mosquitoes while in the shower or bed…again, pure luxury. I caught a glimpse of myself in the bathroom mirror. The mosquito population had clearly sequestered much blood from me in the last few days. My arms, neck and ankles were a dot-to-dot exercise that would entertain a dermatologist for hours. My face…I looked like a pubescent teenager again, with enough direct hits from mosquitoes to frighten any self-respecting doctor into prescribing lotions and potions to protect the publics eyes. I felt as about as attractive as a wart-hog with hygiene issues. But why me…these blood-sucking nasties of the Hell Creek seemed to be avoiding most of the team and surrounding me in feeding frenzy every time I was daft enough to expose skin. My mosquito net that I draped over my hat, only seemed to succeed in trapping the little bugger closer to my skin…they even managed to get through my damn jeans! The tungsten-tipped mouthparts of the pigeon sized South Dakotan mosquitoes were no match for anything I wore or glazed myself with. The 100% Deet just seemed to marinate my flesh for an alternative flavour to these voracious gits.

The hunt for fossil bone, was not being hampered by lack or water, enthusiasm or even snakes…just mosquitoes, literally draining the life-blood from our endeavours. We needed a day off…a Mammoth day-off…
Posted by Phil Manning at 04:07