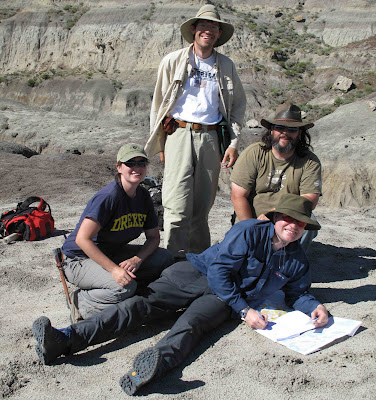 Today was one of those days when things went well, very well. In fact, the past two days have been blindingly stunning on the bone front. So much so, I cannot say exactly what we have found...yes…that good! The biggest find of this field campaign was made by Victoria Egerton. She was the envy of every red-blooded bone hunter on the Badlands today. It must be said that after making the find, she insisted it was a team effort, but that was only due to us tying her-up in gaffer tape and threatening to bury her…we’re not bitter. Honest. Her site is slap bang in the middle of BLM land and has little to no overburden (this being the USUAL 300 tons of rock you have to move prior to getting to bone). Even better, the bones she has found are stuck in a fine-grained sandstone unit (looking just like a nice channel sand), capped with typical Hell Creek overbank mud. This site will be the reason we come back next year and possibly for many years! If anything, just to find where we buried Victoria…we’re not jealous. 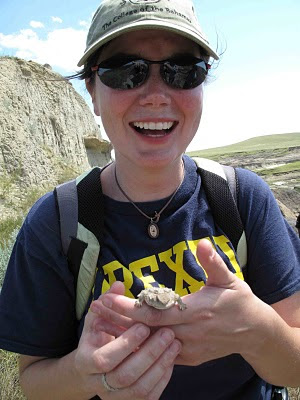 Victoria is in the process of completing her PhD at Drexel University in Philadelphia. She has much experience of chasing dinosaurs from South America, North America and Europe. She wanted to be a geologist when she was knee-high to a grasshopper and has pursued her passion for palaeontology with much vigour. In fact these past few days she has been sprinting up and down Badlands and falling on her rear-end; repeatedly. This is not down to a lack of coordination, but more to do with the fact that her walking boots have less grip than a pair of roller-skates on a sheet of greasy ice…this has been entertaining the whole team all week. A couple of times she has stranded herself on the sides of buttes, hanging precariously, asking for assistance…we eventually give in, once we have picked ourselves up off the floor and clearing our eyes from the tears of laughter. We’re a supportive bunch. 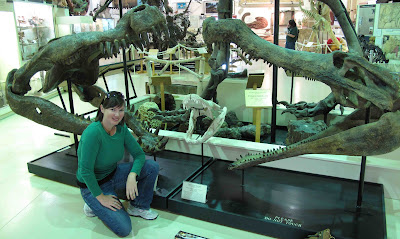 Victoria is a very self-sufficient soul, who often refuses help when offered. This can be a little frustrating on the occasion she is about to slide (Torvil and Dean Ice Dance style) into a sunk-hole. This said, she is always first to jump the void. Holding your own amongst a bunch of hairy guys is not easy…even for me, but she keeps one and all in her small stride…as she is also a short-arse. In fact, in tall grass we keep losing her, hence the attached bell on her rucksack, but yesterday Bill followed a rancher’s dog for over a mile through tall grass, thanks to a bell trinket on its collar. Jason suggests that we need to invest in a large baby-backpack so we can carry her through the long grass…she’s not too keen on this!

The spitting, swearing, hard-drinking and general loutish behaviour of Victoria has earned the team much kudos with the locals. She won last weeks pig-wrestling competition and we’re entering her for the pig-racing later this week. We’re sorry that we will miss the next months long-horn jousting, as Victoria is mean with an AK47 bayonet (she claimed as her field tool….actually beat if off a Russian storm trooper by all accounts!). To be honest, Victoria is a sweet Southern Bell, with nerves of steel and a bayonet to match.

Enough of Vic the Impaler. The site we saw today was one that makes grown palaeontologist weep with joy. So much bones, good bone, in one place, with stack still to be uncovered. Dinosaur Nirvana was found today in the Hell Creek. Woof! We are now all sat comfortably in our local salon celebrating today’s finds, toasting the fact that Jason Schein is home safely and has missed probably the biggest find in his whole career…not that we’re rubbing it in...hahahahahahaha! Jason ‘sexy-beast’ Poole is sad that his parallel Jason buddy is not here with us, he has renamed his invisible friend ‘Jason’…we’re just letting it pass, as he is bigger than the rest of us. His invisible buddy keeps asking him to cut-off his shirt-sleeves? 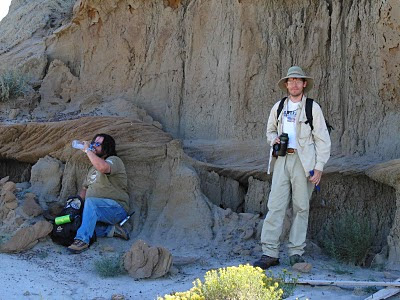 In the next few months we will have to find ways to raise funds to excavate this new site. This is not easy in the current financial climate. Some may even argue we should not be funding such frivolous science. However, I can assure all that the techniques we have been developing to tease information from fossils are now being applied to many living species. The blasting of fossil feathers with synchrotrons is allowing us to understand much about modern species that hold so much more chemistry for us to sample and interpret. The use of LiDAR (laser scanning) is helping us map excavations, but police map scenes of crimes, the computational models helping us understand the locomotion and loading of extinct bones, is now being applied to humans and other animals. Without the ‘blue-sky’ science of palaeontology, so much would not be developed and applied to other fields, lest we not forget the younger scientists who start with dinosaurs and pursue these animals into science whilst at school. Dinosaurs still have an important place in the encouragement and development of science in many disciplines. I hope there is some glint of support for our future endeavours, as
who knows where it might lead. 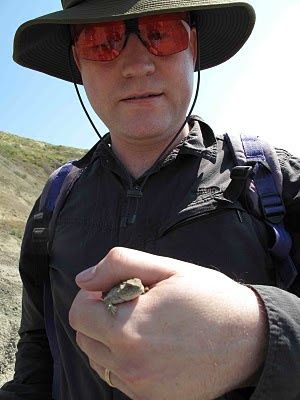 The taphonomic clock of time is ticking. This site has remained entombed for 65 million years before being exposed and will only survive the bleak winters and harsh summers of South Dakota for an instant of geological time. Once bones are exposed, they weather and soon crumble to dust. The blistering heat, heavy rain and even hail and snow of summer will soon subside to the yet more severe weather of winter. In these parts, if you don’t like the weather, just wait five minutes. This remarkable Hell Creek time capsule will undoubtedly reveal much about the last blast of the dinosaurs’ reign on our planet. We have a rare opportunity to save a snapshot from our planets past, in a time when we worry about its future. Let us not forget, the past is indeed a powerful key to the present. The message from the fossil record about lost worlds and forgotten lives must not fall upon deaf ears.
Posted by Phil Manning at 05:28