Today we decided to have a day off from the Badlands. Not that we were tired of finding bone…as that is the reason we exist, but the mosquito bites were now so numerous…we just needed a break from the South Dakota Vampires. We were that fed-up of being bitten; we were prepared to drive all the way to Hot Springs to see more recent bones, those from the last Ice Age.
Dr. Larry Agenbroad is the brains behind the whole Mammoth site and its development since 1976. Larry is literally a mammoth legend in the world of Ice-Age Woollies. The first thing that he asks me EVERY time that he meets me always makes me grin… “Are you still working on those Lizards Phil?”…there is a splendid divide between the dinosaur and mammal world that few broach…bar maybe Larry, as his site is simply gob-smacking in every way. Here is where mammoth and mastodon came to die…repeatedly! 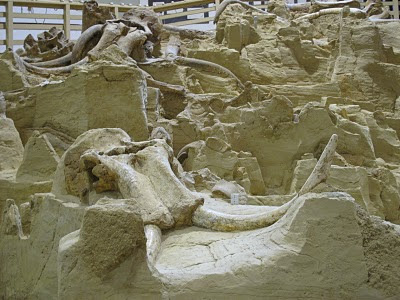 Our biology specialist team member, Bill Sellers, was particularly taken with the mammoth site. If you’re ever in a queue and there is a chap in front of you with a sorry looking, duck-tape repaired purple rucksack…it will probably be Bill. He and his backpack have been inseparable for at least 25 years…it is older than some members of the field team! In this time, his rucksack has accumulated various repairs, additions and possibly its very own ecosystem, reliant upon Bill inserting foodstuffs into the purple void. Bill has been known only to travel with this rucksack with no hold-luggage, surviving on a minuscule amount of clothing for a week…plus it doubles as his laptop bag. He has a passion for all living things and usually has his camera pressed to his face chasing grasshoppers to Rhinoceros…the latter I have done with him and have the scars to prove it! His area of specialism is primate locomotion, but the movement of any living (or extinct) organism brings a smile to Bills pale face. Did I not mention his pallor skin? Bill can spend a month in the tropics only wearing a thong and still come back white as a sheet. Each morning he bathes in pints of 50+ SPF sun cream. Camera crews have used his chest as white-balance check in the past. His hallmark purple ecosystem is nicely set-off with his pink sunglasses…yes, bright pink.
Bill literally views the world through rose-tinted glasses and assures us it’s much better that way. Bill decided he was not sleeping too well after the first few nights, so he went in search of something inflatable to wrangle in his sleep. He searched high and low for a suitable device, but had to settle for an airbed. His nightly residence in the fieldstations workshop has paid dividends on the mosquito front...they do not seem to like the smell of engine oil!
Bill and I were particularly interested in the tracks in the mammoth site, as they are in stunning cross-section, telling us so much of the mechanics of their formation. Standing inside the bone-pens with Larry and the team, visitors walking past watched us with confusion, as we ignored the bones and stared at squelch marks in the site walls. Before long, we were clearly part of the exhibit, with the bones left literally where they were found, now augmented with a bunch of gesticulating scientists…bar ‘sexy beast’ Jason, who disowned us to go and sketch the site. Between us, we probably managed to spoil a large number of tourist photographs of the mammoth site, for this we are truly sorry! A great thing about such visits with new folks; you get a chance to hatch some fresh research ideas. Bill and I were very keen to excavate one of the large mammal trackways in the site...a heinous crime even to ask such a thing. However, Larry was happy…sorry about that one…to let us excavate the said trackway next year. We are now planning a small mammal-tracking excursion next year…funding permitting! 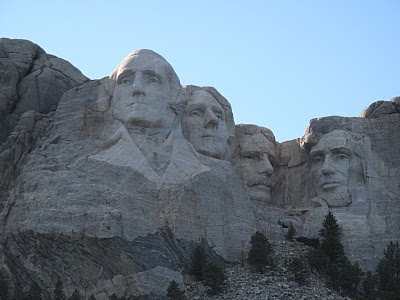 After Walking with Mammoths and thanking Larry, we headed to see Mount Rushmore, stopping first at George Washington’s profile...and then a presidential full-frontal. As always we were greeted by a low murmur of, “its smaller than I thought it was”, “is that it?”, “where is the full size presidents?”…if Mount Rushmore had ears, it would have a complex!
Posted by Phil Manning at 04:08