Ich bin ein Berliner...well, at least for these past few days!

The Digital Fossils meeting has just ended its three day meeting held in the Museum fur Naturkunde in Berlin, organised by Heinrich Mallison...and what a splendid meeting! It seems that fossils have truly made their way into the 21st Century.

In the past ten years a series of image acquisition developments have dramatically increased the rate, size and format of data recoverable from fossils. The elegant simplicity of a line drawing often tried to capture the complex three-dimensional (3D) nuances of a fossil with the hindering constraints of a two-dimensional (2D) medium. Photography was rapidly adopted as a cost-affective medium from which multiple images might project the complexities of form. This simple and economic approach has now been heavily augmented by 3D photogrammetric techniques. These basic starting-points for data acquisition are still used in the acquisition of morphological data in palaeontology and are now augmented with the advances being made in photogrammetry. The digital revolution in photography has almost certainly advanced the ease of data acquisition, but increasing file size and sheer numbers have sunk many ‘standard’ 500 megabyte hard drives. External drives of 1-4 terabytes have become the norm as sinks for such digital photograph databases, but larger digital files are now being generated by a host of new imaging techniques being applied to the study and analysis of fossil samples. 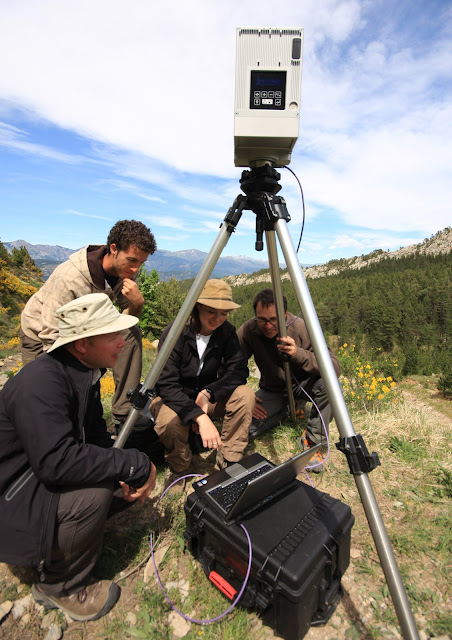 In addition to photogrammetry, 3D surface scanners (hand scanners to LiDAR), X-Ray Computed Tomography (both medical grade to Synchrotron) and Synchrotron Rapid Scanning X-Ray Fluorescence (SRS-XRF) are being used from small scale (nanometers) to vast scales (several square miles of digital outcrop model). As resolution increases, combined with colour channel photogrammetric data applied to point clouds, so too do the file sizes. Once laptop-sized manageable datasets have to migrate to multicore workstations or high-performance computing to resolve visualization solutions. The 3D X-Ray Computed Tomography data generated by medical imaging systems has on the whole been very manageable, but with the advent of X-Ray microtomography, the data sets have become vast and complex to open, manipulate and store.

Now that palaeontologists have also started collecting data using synchrotron light sources around the world, initially acquiring high-resolution tomography data. The tiniest fossil, when scanned in 3D at nano-resolution yields data sets inversely proportional to their size. However, the potential for synchrotron-based imaging includes SRS-XRF. In the last three years, this synchrotron-based chemical imaging technique has provided high-resolution 2D elemental maps of the chemistry of fossils and their embedding matrix (Figure 1b). SRS-XRF can scan at resolutions from 100-2 microns, with high sensitivity (ppm) and an experimental stage that can take samples up to 1 metre2, yielding vast scan files. The next logical steps for the synchrotron-based imaging is to take the 2D SRS-XRF and expand the data further to allow the recovery of 3D (sub-surface) chemical information. The potential of Synchrotron K-edge subtraction tomography/fluorescence is about to be applied to palaeontological samples for the first time. The technique will recover 3D elemental data from within a fossil, yielding valuable information on the taphonomy and possibly identifying the presence of remnant biomarkers that may lay hidden with a fossil. 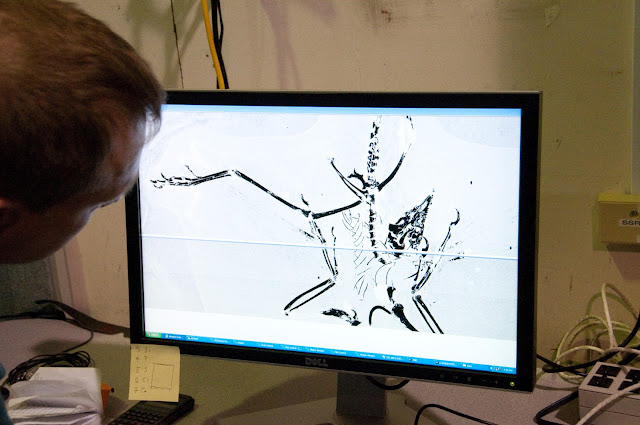 The University of Manchester Palaeontology Research Group is now starting to develope software solutions to the recovery, processing and management of data generated using many of the above techniques. It has not been possible to generate a ’one-size’ fits all solution, given the diverse types of data being generated. However, the team is now tackling the storage and management of data using a mutliscale solutions approach. However the question still remains, ‘Are we ‘byting’ off more data than we can chew?’

Posted by Phil Manning at 21:30 No comments:

The past few weeks have been a little busy. After spending much of August surveying, mapping and digging at our excavation site in South Dakota, the really hard work begins now! The busy weeks that followed have entailed shipping a few tonnes of dinosaur from South Dakota to New York, some lectures in Utah and a visit to New York....to deliver the more delicate finds from our Hell Creek excavation sites.


Preparing dinosaur bones for shipping is akin to squeezing a large elephant into a phone box along with vast quantities of bubble-wrap, foam and plenty of optimism...as the crate that looked so cavernous 5 minutes ago shrinks before your very eyes. This is possibly the only time when your precious dinosaur bones appear too large, as normally the 'fishermen's tale' principle makes your bones shrink prior to exhibition, public lecture or any time when you need to impress a potential funder...palaeontologists so love to hear, 'Oh, I thought dinosaurs were bigger?' or 'Is this a small one'...when you hand over a vertebra from a 40 foot predator.  I now simply shrug my shoulders and say, 'I'm sure they were bigger when I packed them?' or 'Its OK, the bones are just shy...deep-down they are huge'.


A single bone can often cloak the size of a vast dinosaur. One tail vertebra from the distal-most part of a sauropod tale might well compare in size to a regular can of Red Bull, but this is but a small echo of a vast skeleton that was once attached to ten's of thousands of pounds of dynamic flesh. It is the same way you might look at the skeleton of an elephant or walrus in a museum and ponder on how big the animal might have looked in life. It is only when you are stood right next to a living elephant that you truly comprehend their sheer bulk and size. This often makes me think on how much meat once hung on the vast bones of a single sauropod dinosaur and how long it might have taken to dine your way through such an enormous feast. While bigger predators would have no doubt taken their fill of fallen prey, as is often evidenced from their shed teeth and the gnawed prey bones, it would have been the smallest facets of the community (bugs to bacteria) that ate more than their fair share. The 'recycling' of a fetted mountain of flesh and bone....as yes, even the bones would be reprocessed by members of the community...most dinosaurs and other extinct life stood little chance of making it into the fossil hall of fame...we call the fossil record.


However, it was clear that an occasional 'leak' existed in the recycling of dinosaurian and other beastly body parts. One that allowed some of our lost world residents to slip through the taphonomic net...taphonomy being the study of burial laws...to be trapped in the sands of time. Again, we should not snort in disbelief at such chance, given the carbon-based economy that drives our planet is a pure function of organic molecules surviving the ravages of time (albeit altered to various stages of hydrocarbon breakdown products). I personally am very grateful for these 'leaks', as it provides me with both fossil fuel and a career!

Its a wonderful thought that our precious prehistoric cargo is slowly waddling its way toward the hallowed halls of the America Museum of Natural History in New York City. Splendid!
Posted by Phil Manning at 22:39 No comments: