First Rattler with many beasties!

Today we had one ‘hell’ of an interesting site to see in the Badlands. I was amazed at how green the landscape looked. Last time I was here, brush fires were raging from North to South Dakota. This year there was no haze of smoke on the horizon. The rain meant fantastic plant growth, more food for the rodents, providing even more to eat for the resident reptiles. Apparently, it had been a good year for rattlesnakes. The very mild winter (I think all the snow fell on Philadelphia and Washington DC this year) had allowed many more to survive and breed, especially with the now plentiful rodent population, which had also taken advantage of the mild winter. The haemotoxic venom they are capable of delivering makes them potential problems for all field crews. However, the distinctive rattle, a series of modified scales at the tip of the tail, usually gives plenty of warning. I was more worried about the very young snakes, which do not have a rattle and cannot gauge how much venom to pump into their prey, often delivering too much—small snake does not equal less venom! The availability of anti-venom has reduced the fatality rate of rattler bites to a mere 4 percent. Yet I didn’t care to become a statistic. 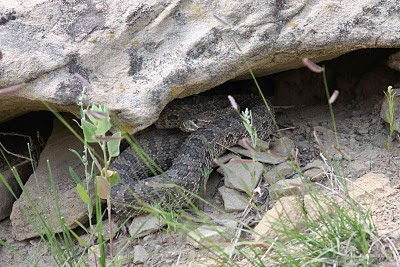 We are all kept in contact while prospecting via decent walkie-talkies. The claimed 36 mile range for our units was reduced to around 5 miles in the Badlands…enough so we can comb large areas in split groups. Today the two Jason’s were off together prospecting on the opposite side of a typical Hell Creek washout. We were doing the usual locate, GPS, map and written descriptions of everything we found. As they waded through the long grass Jason Poole heard the sound that makes anyone’s heart skip a beat. The rattle of a rattlesnake is a sign that it knows exactly where you are…but it is rare that you know the same of the snake. Their camouflage is too perfect, especially in long grass. Most sane people run away from this sound, shoot at the sound or beat the said sound with a large stick or any available sharp object...but our Jason’s, they laugh in the face of such sounds and seek its origin. The pair are simply bonkers…I simply asked “why”, they simply answered, “we want to get a decent photo of a rattler”….of course! Thankfully, the snake avoided them…I must work on their suicidal snake tendencies! This reminds me of an old friend, Duncan McIlroy, who is based at Memorial University (Canada). He, a colleague and I were driving across the Valdez Peninsula in Argentina and had been taking pictures all day of various beasties, but we had yet to take a photo of a skunk…yes, I hear you say, “that’s possibly worse than a snake”…such ventures are always bound to end in a sticky (or in this case smelly) end. This is a tail I will tell another day…but at least we survived with photographic evidence! 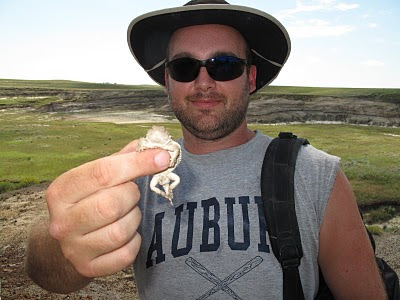 Jason Schein was on his last day with the field team, as he had to start the long (VERY long) drive back to Philadelphia. He had already been working in Red Lodge (Montana) for two weeks before joining us in South Dakota. Jason Schein is quite different from his “sexy beast” hairy ‘twin’. Jason Schein has a special place in many married women’s hearts…they simply adore his southern accent, cut-off T-shirts, biceps the size of most sumo-wrestlers thighs. Jason is our ‘palaeo-hunk’, but doubles as a ‘palaeo-hulk’ when excessively large objects need shifting. He is not only graced with brawn, but also excessive cranial capacity…he’s nearing the completion of his PhD…so soon we will have to deal with ‘Dr palaeo-hunk’. He works at the New Jersey State Museum…just in case there are any guys out there who do not wish to place their wives under his spell…by taking the kids to the Museum. Jason also has a splendid habit of being very understated and reserved, almost British in his gentle nature…again, we’re sure it’s a cunning ploy to entrance the opposite sex. In my own vain attempt for me to look relatively muscle-bound next to Jason, I’m trying to get the mosquito population to concentrate their bites on my biceps…pitiful attempt on my part!
Today we got more than lucky on the theropod front. Literally meaning “beast-foot” this group includes all predatory dinosaurs and even their descendants, the birds! In the Hell Creek Formation this includes the ubiquitous Tyrannosaurus rex, various dromaeosaurs (nasty little predators aka Jurassic Park Velociraptor) and a few less well-known beasties such as Nanotyrannus. Today we managed to pick up various body parts from almost all of these animals. Something I have never done in my whole career as a palaeontologist, so you can imagine we were all totally gob-smacked!
Posted by Phil Manning at 01:51