Today I awoke early, as I knew we would get to see a new track site....one that no one has published anything on...yet! Given Martin Lockley (Dinosaur track guru) has already been to this site, the publications will no doubt be appearing very soon!

Brandon and I ate breakfast early (ish) and then headed-out to the track site. We hired a mini-van driver...this was our first error of the day! As we got into the back of our trusty vehicle, we were greeted by a strong smell of fuel...it was all over the floor. By the time we had decided, 'this was not a good idea'..we were already moving. So, windows down we headed into the country just outside Zhucheng. If you click this link...you can see where we went: CLICK HERE


The link was sent from my rather nifty Spot satellite locater that I often taken into the field...might use this on a future blogs? 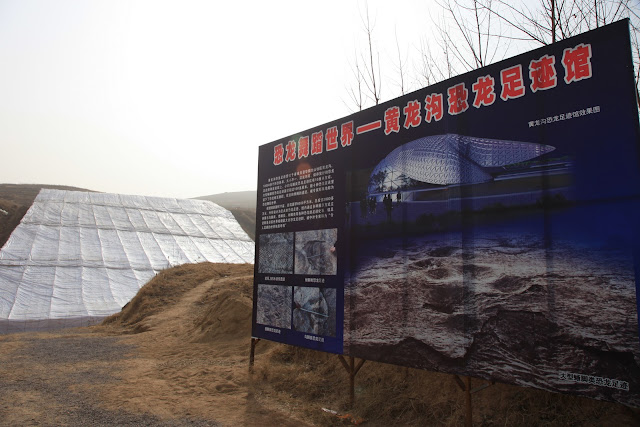 The plans to build on the site were clear when we arrived, which was surprising given the remote nature of the locality...but dinosaurs are looking to become an important driver in the Shandong Province economy, so this site certainly fits into those aspirations.
Fossil dinosaur tracks have the potential to reveal additional information on the size, gait, and speed of dinosaurs, their locomotive evolution and also to provide clues to their behavior. Furthermore, the tracks, together with the surrounding sedimentary rocks, are a record of the global Mesozoic terrestrial environments and ecosystems. When interpreted correctly, all vertebrate tracks, not just those of dinosaurs, can assist in the interpretation of past environments, behavior, and ecology, and therefore their study has wide-ranging application to themes such as biodiversity and environmental change.
The underlying assumption of many interpretations, through nearly 200 years of literature, is that what is preserved is a surface track. The geometric data (e.g., track length and width, digit length, number of digits) on which these interpretations and trace fossil classifications are based are therefore recorded essentially as 2-D features. However, vertebrate paleoichnology—the study and naming of vertebrate tracks and traces—has concentrated on describing the trace with little or no interpretation of track formation and preservation. The way sediments behave before, during, and after a track is formed, and the subsequent processes that may further modify a track have been essentially neglected.
The science of un-picking tracks has been close to my heart for many years and will even be the subject of my talk at a conference being held in Zhucheng over the next few days...the reason why I'm having to edit a stack of images....write my talk...and then sleep....I will upload images to my blog tomorrow...forgive a tired palaeontologist.
Posted by Phil Manning at 15:36