The fate of the Duelling Dinosaurs has still to be decided. The Auction room was crowded, maybe too crowded. I was present at the auction to document the sale of the fossils for a documentary.  The international press sat alongside us, squeezed between fossils and bidders. This was my first auction...a strange experience to the uninitiated. As the auctioneer started the sale, I felt my eyes suddenly drawn to the floor, in slight fear that a simple smile or gesture might land me with an impossibly large bill from Bonham's. As each prehistoric lot appeared on the plasma screens, I found myself watching those bidding and not the fossil lots. Each person was there for their own reasons, some for the spectacle, others to acquire and many just to see the fate of the auctions namesake, the Duelling Dinosaurs.

The said auction lot came into play. Looking around the auction house, it was clear all eyes were now focussed upon the auctioneer. Within seconds the initial bid had gone from 5 to 5.5 million dollars...two people were bidding from the audience. Everyone was straining to see who had placed the bids, but no sooner had they been placed....silence. The auctioneer scanned the room, searching for a higher bid...and none came forth. 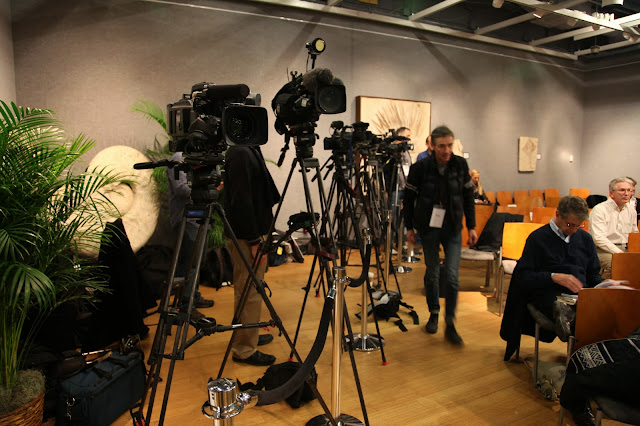 The reserve on the combative couple was not met. The saga of the Duelling Dinosaurs that began with their discovery in 2006 remains unresolved. Whether these fossils find a home in a museum, remains to be seen...I shall endeavour to follow the story of these remarkable fossils.
Posted by Phil Manning at 22:40