When was the last time that you heard some sad news about an endangered species and a little piece inside of you quietly wept. That helpless feeling that so often fills you with sadness that another species is going the same way of the dinosaurs. Not so the Blue Iguana. Here is a conservation tale that will hopefully leave you with a little warm glow of success inside. This is the tale of a species that stared extinction square in the face and delivered a salty-sneeze at its doom....with the splendid help of the Blue Iguana Recovery Program (Grand Cayman) (BIRP). This priceless band of eco-warriors have turned the tide for a whole species. Meeting such folks is a humbling experience...but I was lucky to find myself in their hallowed halls (well...enclosures) in the last few days. 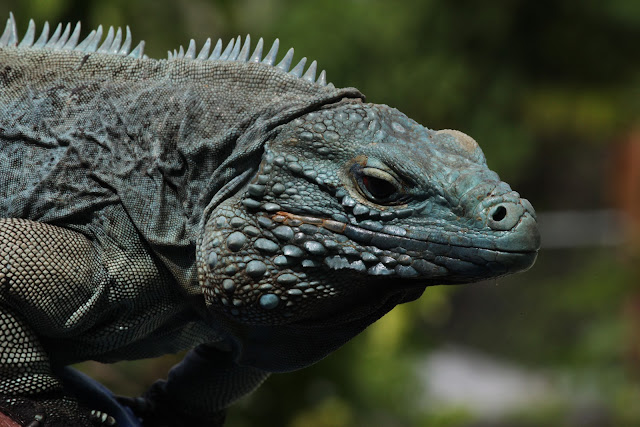 The Blue Iguana (Cyclura lewisi) is a breathtakingly beautiful blue beastie... one that the awfully nice folks at BIRP have teased back from the brink of extinction. This was a species that was critically endangered, but is now merely endangered (honest... this is a very good thing!). The population teetered on the brink of extinction only a handful of years ago, with a mere 100 or so individuals left on Earth...now their number exceeds 1000. The folks at the BIRP know a thing of two about what makes their precious charges breed. More importantly, they have carefully constructed a program that ensure genetic diversity and strength ...a case of watching/controlling who breeds with who! In the case of this species, if you breed with someone too close to the family, your offspring will be infertile...not good for any species, especially one starring into the abyss of extinction. 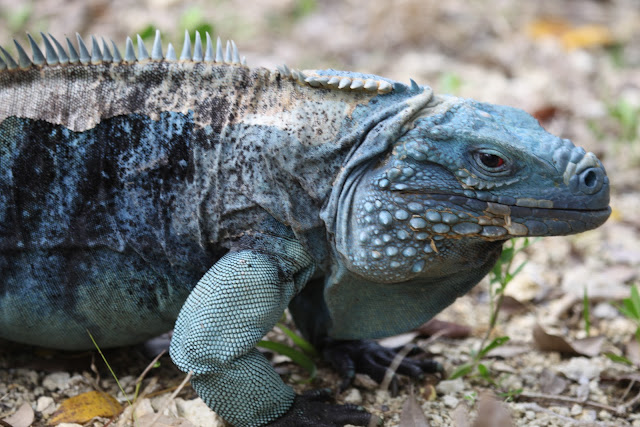 These beautiful blue blighters struggle on the reproduction front, when compared to their Green Iguana (Iguana iguana) cousins who produce larger egg clutches at least three times a year, compared to the solitary or few eggs produced by the Blue. It must be said that they do get better at producing eggs when they get older, but...in terms of competition for space and food, the Green's win. 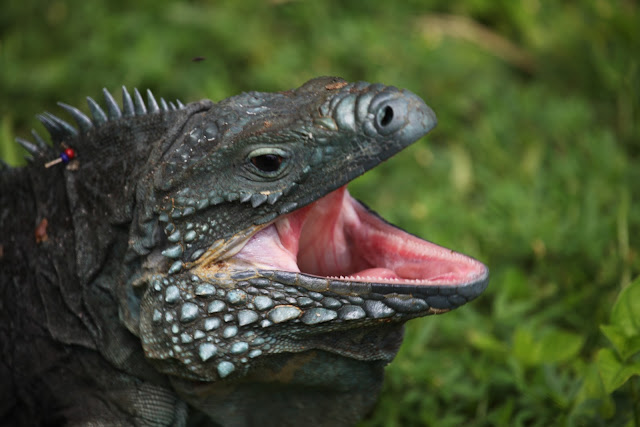 However, the Blue Iguana still has something to smile about. With the committed work of the BIRP, this species has recovered its numbers and is ready to go wild again. This is the most incredible facet of this conservation program...it is so rare that a conservation program is so successful that it has to evolve or become extinct. In this rare, but oh so satisfying, moment in the conservation of this species, the BIRP team is looking to change its spots to become managers of a wild population, as opposed to one that has to bump-up numbers. The story of the Blue Iguana is far from over, as there is this interesting transition from breeding in captivity to management of a species in the wild...I dock my hat to the wonderful folks at BIRP for achieving what so many have tried to do..but who have so miserably failed. Methinks there is a trick or two we should learn from this team of interpreted conservation stars!
Posted by Phil Manning at 20:34