The great thing about staying with James and Andrea, was that we all got to meet plenty of interesting species on our doorstep. They both have a passion for looking after beasties...not surprising given James is a vet. However, I have met few vets as dedicated as James (Karen of course!). He answered his cell phone and made house calls for owners with vomiting cats to dogs that were refusing to eat...on Christmas Day and Boxing Day, when few would even consider picking up a phone! Let us return though to the several acres that James and Andrea work is jam-packed with alpaca, Highland Cattle, etc.
The day after we arrived in Tasmania, James decided to put us all to work. We were to move 20 or so alpaca from one enclosure to another, and then coax them into a shearing pen. A simple task. It was summer in the southern hemisphere and their coats were thick, so the shearers had been booked for the following day. James and Andrea organised our 'team alpaca' into an disorganised line of 'herders'. Phase 1 of the exercise went smoothly, possibly courtesy of the large number of fences corralling the alpaca from one enclosure to the next. Phase II, involving the shearing corral...was interesting...James possibly found it infuriating, frustrating, annoying, confusing, amongst other verbs, usually combined with loud expletives, that were liberally offered to the whole team. This far from focused us, having the main affect of making us break-down into fits of laughter...sorry James. 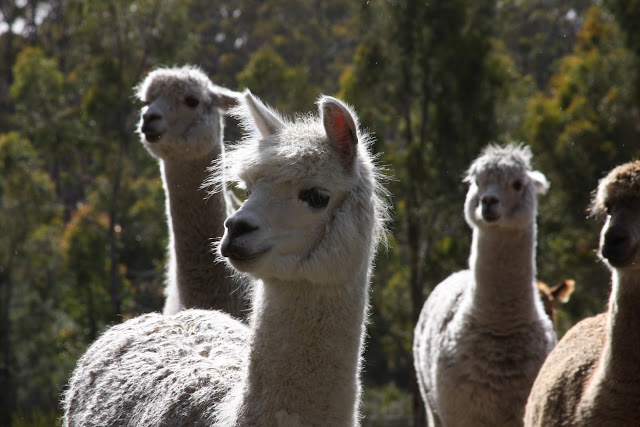 To say we were hopeless at herding alpaca would be very generous. James knew exactly where he wanted us each to stand and what each of us had to do, we were just not very organised in translating that wish into reality. After several attempts of gental arm-waving and coaxing we had only managed to persuade two sheep, who lived with the alpaca, to enter the shearing pen. This they mainly did by themselves....when we were not looking. The alpaca were successfully herding us, more than we were them. 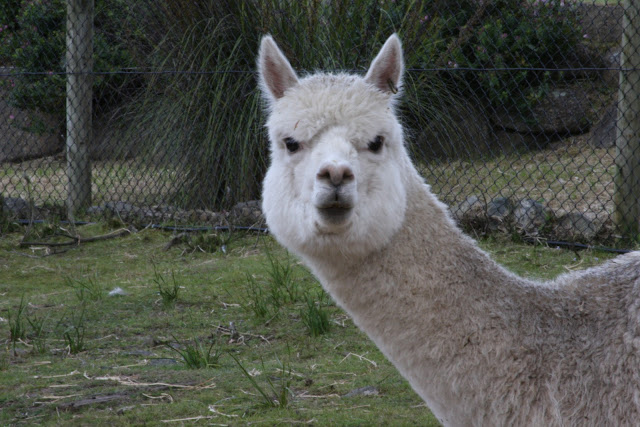 The worse we became at herding, the more frustrated James became, but Andrea on the other hand just remained calm and smiled, "It took us years to figure these animals out"...we had only a few hours and were at that point...far from functional alpaca herders!  After much arm-waving, expletives, running, stumbling and coaxing, the alpaca finally gave up on their playful game of 'avoid the corral' and slowly entered their shearing pen...much to one and alls relief. We were all exhausted. I still think James is convinced we were deliberately being daft?
A couple of animals that were slightly easier to deal with were the Clydesdale/thoroughbred giant horses...and I mean giant, as both were over 17 hands! Jim is pictured below with one of the said giants...its worth pointing out that Jim is 7 feet tall.... 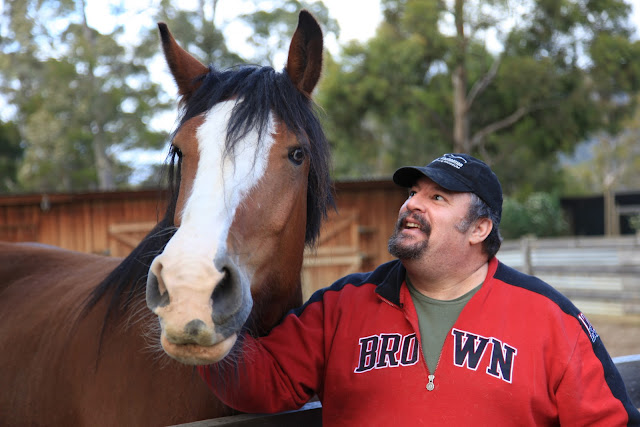 Whenever James, Andrea or Jim called to the horses, they would skip over like two colossal puppies...the horses that is. Enough of the animals 'back at the ranch', it is time to show you some of the Tasmin wildlife that is so incredible. The first wildlife sortie we made, entailed getting up at 4am...at a location near the northern tip of the Island. 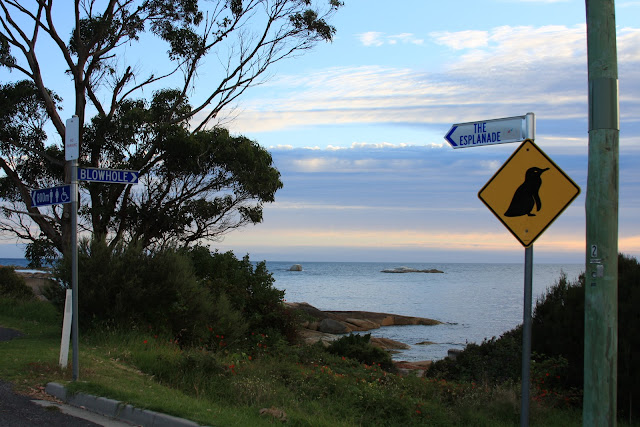 Its rare that you see a sign with the words 'Beware penguins'...but come to the southern hemisphere and its not too uncommon. However, the species of penguin we were interested in here, was the smallest penguin known in the world, the Blue Penguin or Fairy Penguin (Eudyptula minor) and is far from common. 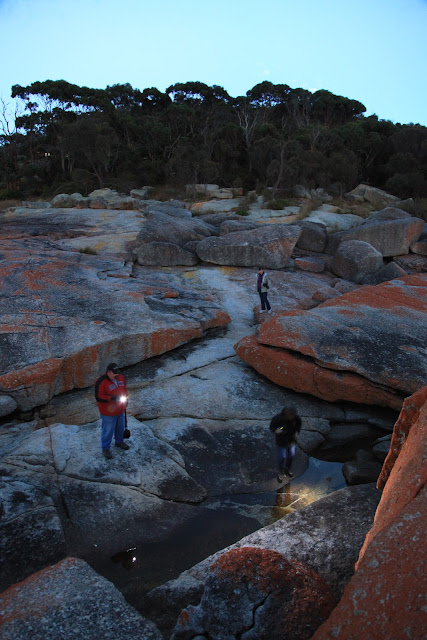 Sporting flashlights and cameras, we headed to the shore at 4am, to a locality that Karen had visited before, for the same reason. Being an avian vet, Karen is inordinately fond of birds, but lets face it, who is not fond of penguins? 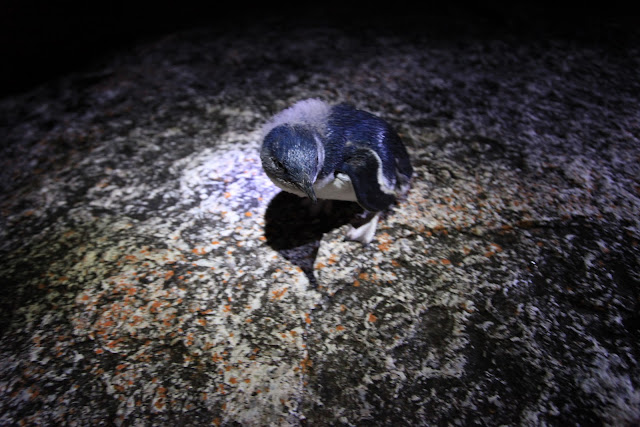 Jim, Karen, Victoria, Hillary and I were the only ones to rear our heads at 4am...El decided to sleep it out. As we pulled-up to the beach in my 'soccer-mum' people carrier (a badge I wore for the whole trip!), we were instantly greeting by the calls of waking penguins and the smell of raw/processed fish. When I say processed, I mean via the gut of the said penguins...not a pretty smell.
As soon as we stepped on to the rocks, we almost stumbled over the Blue Penguins...they were incredibly tolerant of us and our lights, as they hopped and waddled their way to the shore, to make for their feeding grounds. 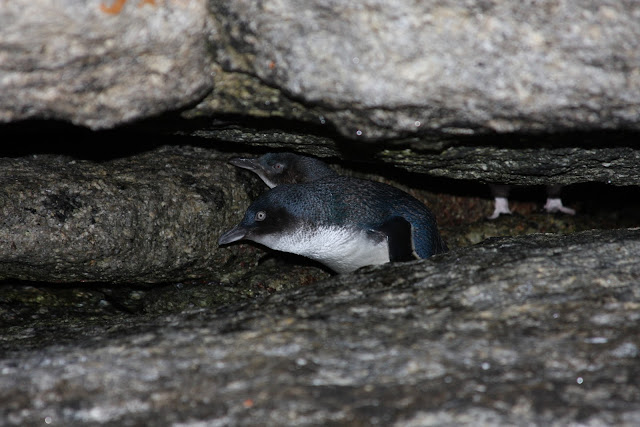 Some spied us warily from beneath rocks and coves, but most waddled about their morning business. 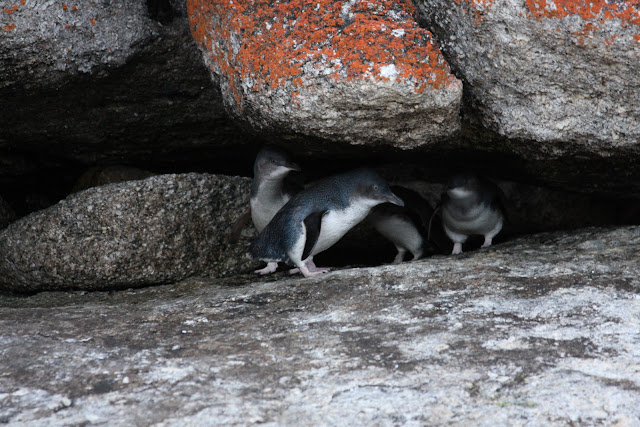 As the sun began to rise over the shore, fewer and fewer penguins could be seen or heard. The sunrise was suitably tastastic...a great way to start any day. 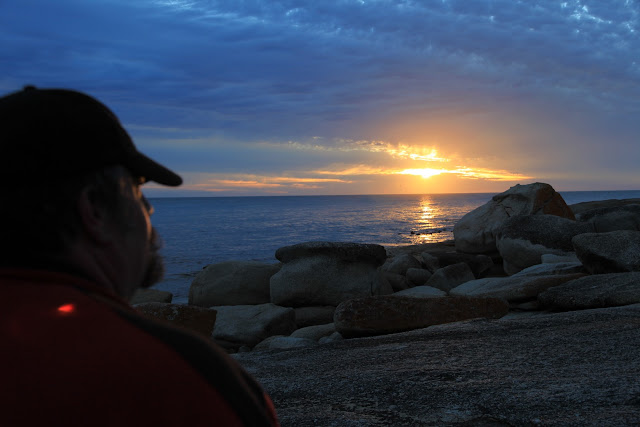 As we packed up our cameras and headed back to the car, we decided that today would be a wildlife day...besides, it was Boxing day...now what species would be a suitable species to look for on boxing day? 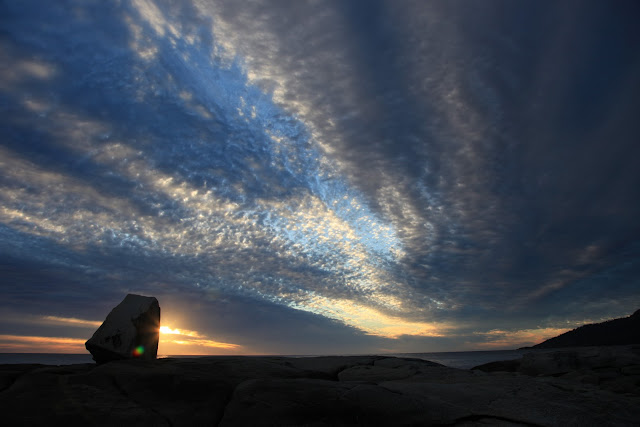 We soon found a sign that confirmed our potential boxing wildlife had undertaken the dangerous past-time of car-tipping...possibly a function of the said species miss-hearing in conversation the unpleasant practice of cow-tipping. Personally, I have no idea why one would want to give spare change to a cow? 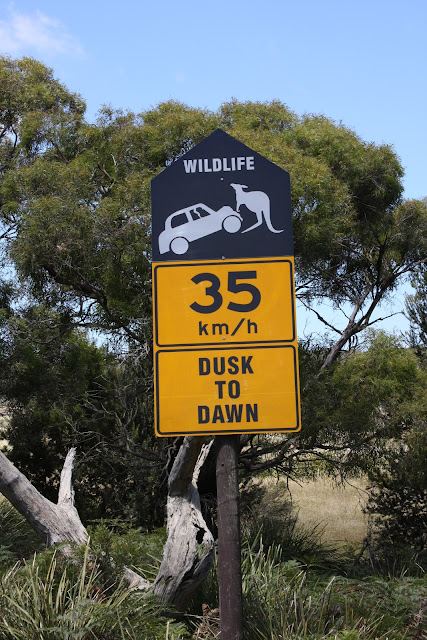 Bounding marsupials and spiky monotremes to follow soon!
Posted by Phil Manning at 22:23