'Intense' but fun weekend at the Diamond Synchrotron

Forgive this post being 'after the fact', but alas the outreach event that my team and I attended at the Diamond Synchrotron (near Oxford) was already sold-out before we arrived here last Friday! This was one of those wonderful weekends when this world class facility opened its doors to the public, including behind the scenes tours of the actual synchrotron.... quite awesome!


Given visitor numbers are restricted in to access the main synchrotron hall (the round bit above), each day had to be booked in advance with the Diamond outreach team. As groups were taken in and out of the facility, they also had to run the gauntlet of science outreach exhibits... including our own! Here we spun our tales of dinosaurs to particles to the visiting groups of families, students and folks who just thought it would be cool to see what happens under the space-ship-like Diamond building. 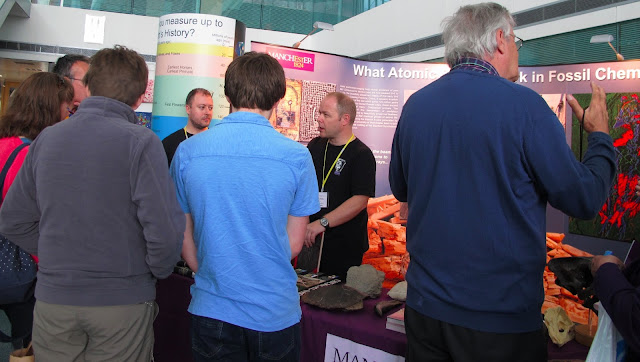 Today my colleagues pointed out that I can get a little carried away when talking about our science. Apparently my enthusiasm can sometimes evolve into 'intense enthusiasm'.....something I had not realised! To support this, my 'helpful' colleagues took some photographs of me talking whilst I was wearing the 'Phil intense face'. I hope that folks who visited today were not too put-off by an over-enthusiastic palaeontologist, who decided to spend his birthday...pulling faces at kind folks who were interested in hearing how unpicking the chemical ghosts of fossils from the past, has real value and applications to both the present and future of our planet.
Posted by Phil Manning at 16:53