Yes, its official...dinosaurs are sexy! This past week at the Royal Society has been crazy...in a very positive sort of way. It seems the public really cannot get enough of matters paleontological, especially when peppered with a liberal dose of particle physics. We did not even need a 'God Particle' on our 'higgs-boson-free' exhibit to convince kids that dinosaurs & particle physics were cool...and the their decedents the birds are even cooler. 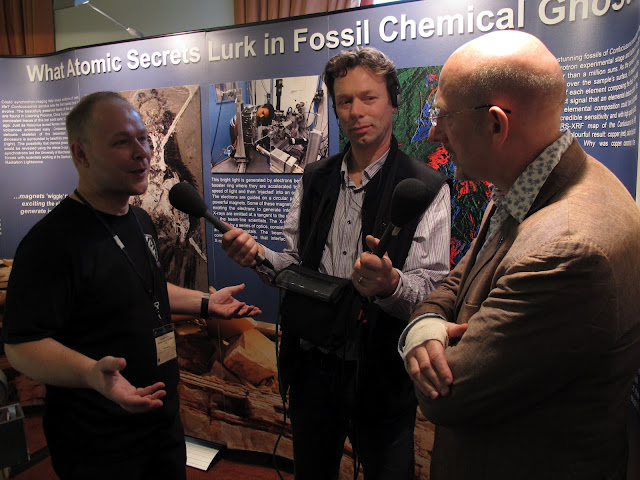 Quentin Cooper of Radio 4's Material World dropped by our exhibit. You can hear our interview on this link that took place on the 5th of July. As you will hear...we were very, very busy! By the end of the week, our feet ached and our voices were mere whispers. It is quite possible that we achieved our goal of explaining to kids that palaeontology is about more than just a bunch of bearded folks sat at the bottom of a muddy hole, playing with fossil bones...although this may well be a fair description of me in a few weeks time. Our exhibit owes its design and production to Dr Victoria Egerton, who worked closely with me on this fun project. We hope to tour this exhibit in the future...so if you have a science fair or festival that fancies some relativistic fossils, drop me a line.

After rushing back to Manchester on Sunday evening through the UK Summer monsoon, we arrived in a rain-drenched Manchester...but the same can be said for most of the UK this year. It has rained so hard, the hose-pipe ban has been lifted...so we can all happily water our gardens this week...thats if they have not been washed away already.

I hope to broadcast a lecture on this blog later this week. One I intend to film at the spanking new Diamond Synchrotron Lightsource, near Oxford. This splendid facility is opening its doors to the Manchester team later this week, as we have some rather awesome fossils to gently tweak with a light brighter than a million suns. All in a days work!