·       T. rex could not run due to its size and weight
·       T. rex was unable to pursue prey at high speeds
·       Even walking speed was limited due its impact on the skeleton
·       This changes the way we have to think about the way T. rex behaved
It is a classic chase scene in modern cinematic history. The image of a rampant Tyrannosaurus rex (T. rex) chasing Jeff Goldblum as he sits injured in the back of a 4x4 vehicle in Stephen Spielberg’s original Jurassic Park.
But could a T. rex actually move that fast, or even run at all?
New research from the University of Manchester says the sheer size and weight of T. rex means it couldn’t move at high speed, as its leg-bones would have buckled under its own weight load.
The research, in collaboration with the N8 High Performance Computer (NPC) research partnership, looks extensively into the gait and biomechanics of the world’s most famous Dinosaur and, using the latest in high performance computing technology, has created a new simulation model to test its findings.
Led by Prof William Sellers from the School of Earth and Environmental Sciences, the researchers have combined two separate biomechanical techniques, known as multibody dynamic analysis (MBDA) and skeletal stress analysis (SSA), into one simulation model, creating a new more accurate one.
Prof Sellers says the results demonstrate any running gaits for T. rex would probably lead to ‘unacceptably high skeletal loads’. Meaning, in layman’s terms, any running would simply break the dinosaur’s legs. This contradicts the running speeds predicted by previous biomechanical models which can suggest anything up to 45mph.
He explains: ‘the running ability of T. rex and other similarly giant dinosaurs has been intensely debated amongst palaeontologist for decades. However, different studies using differing methodologies have produced a very wide range of top speed estimates and we say there is a need to develop techniques that can improve these predictions.
‘Here we present a new approach that combines two separate biomechanical techniques to demonstrate that true running gaits would probably lead to unacceptably high skeletal loads in T. rex.’ 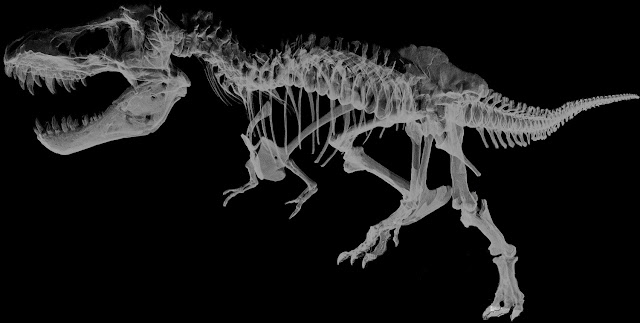 The results also mean that the T. rex couldn’t pursue its prey in a high-speed chase as previously thought. He added: ‘Being limited to walking speeds contradicts arguments of high-speed pursuit predation for the largest bipedal dinosaurs like T. rex and demonstrates the power of Multiphysics approaches for locomotor reconstructions of extinct animals.’
Although the research focuses on the T. rex, the findings also means running at high speeds were probably highly unlikely for other large two-legged dinosaurs such as, Giganotosaurus, Mapusaurus, and Acrocanthosaurus.
Dr Sellers adds: ‘Tyrannosaurus rex is one of the largest bipedal animals to have ever evolved and walked the earth. So it represents a useful model for understanding the biomechanics of other similar animals. Therefore, these finding may well translate to other long-limbed giants so but this idea should be tested alongside experimental validation work on other bipedal species.’
This isn’t the first time MBDA and SSA have been used to measure the walking and running ability of dinosaurs. However, it is the first time they have been used together to literally create a more accurate picture. 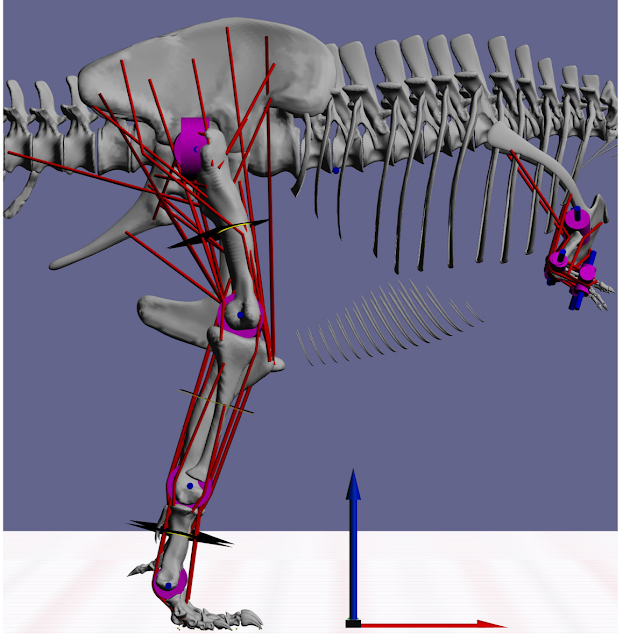 Dr Sellers explains: ‘Our previous simulations of theropod bipedal running did not directly consider the skeletal loading but these new simulations do calculate all the forces in the limb bones and these can be used directly to estimate the bone loading on impact.’
The fact that T. rex was restricted to walking also supports arguments of a less athletic lifestyle. This means the results could change the way we view the effects of how the size and shape of T. rex and other large bipedal dinosaurs alters as they grow.  Previous studies have suggested the torso became longer and heavier whereas the limbs became proportionately shorter and lighter as T. rex grew. These changes would mean that the running abilities of T. rex would also change as the animal grew with adults likely to be less agile than younger individuals.