Rotator cuff pain past and present...

The bones, tendons and muscle that come together in the shoulder are usually referred to as the rotator cuff (but others use 'rotor cup' or 'rotary cuff'). In mammals the complexities of this particular anatomical feature can often bring us pain and discomfort, but dinosaurs were also no strangers to such delights. The relatively conservative anatomy that we vertebrates share so liberally, also generously allots the various aches and pains of the musculoskeletal system to all species...but I have to say that dinosaurs seemed to be able to deal with far more trauma when compared to our relatively frail bodies. The theropod (predatory) dinosaurs often display an array of healed injuries that have attracted the attention of pathologists...those who study and diagnose disease, given the skeletons of these ancient predators are often scarred with evidence of trauma (albeit not much disease!). However, before I get carried away with fractured bones, abscessed jaws and slipped discs...let me refine my tour of pain and discomfort back to the shoulder. 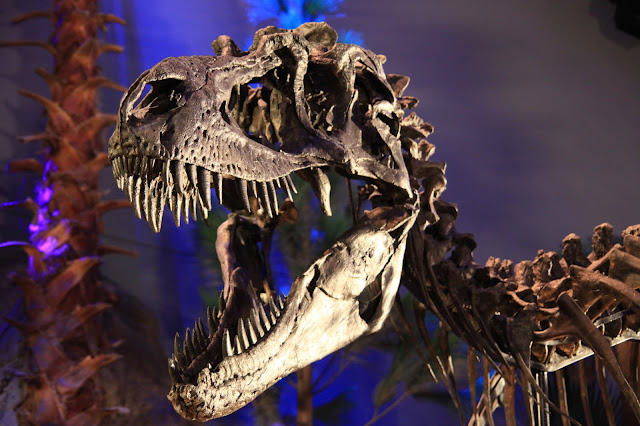 If I were asked to choose my favourite shoulder injury...as if that is something you might ever consider doing...there is a wonderfully sick saurian individual housed at the Indianapolis Children's Museum. This particular dinosaur was stalking around in the Late Cretaceous and is now named Gorgosaurus (literally  'fierce lizard'). Among its many injuries was a splendidly grotesque shoulder trauma that resulted in a vast lump of bone growing over the site of 'impact'. The enlarged lump of roughened healed bone can be clearly seen (below) with the the smooth surface of the unaffected shoulder blade (scapula) to the right and the coracoid to the left. These two bones combine to form the shoulder joint (glenoid) in which the upper arm (humerus) articulates. As an aside, the U-shaped bone to the far left is the wishbone (fused clavicles) of this rather oversized bird relative...you would have been hard-pushed to pull this particular wishbone, mainly due to us humans not having yet evolved. 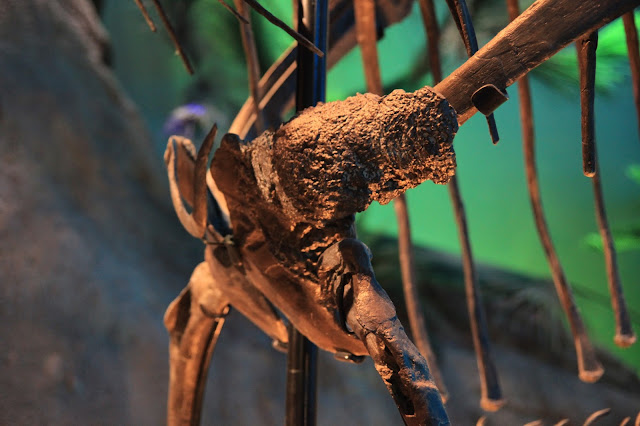 The relative simplicity of the above shoulder complex clearly did not shield this joint from the slings and arrows of misfortune that wreaked havoc with this animals left arm. The evidence seen in this remarkable fossil clearly shows the skeletons reaction to injury, growing additional bone to stabilise the site of injury. However, the smooth surface of unaffected bone was replaced with a roughened surface over which the scapulohumeral muscles would have had to function...this would have been quite painful....that is an understatement. My own interest in this particular injury is quite personal, as I too have managed to damage my rotator cuff. Last field season, whilst juggling a 250 pound field jacketed dinosaur bone, I damaged my left left shoulder when lifting the said fossil. The trauma was minor, so initially treated with anti-inflammatory drugs, but almost a year on...I realise that I am beginning to feel a fraction of the pain that Gorgosaurus might have. It seems that my joint is also generating new bone-growth, shifting the path of some tendons and muscles in my shoulder. While my pain is irritating and providing sleepless nights...I will get this fixed in time. Looking at the impressive array of breaks, fractures, avulsions, tumour and infections on this Late Cretaceous predator, I have a newfound healthy respect for these natural born survivors.