We arrived on site this morning and the atmosphere was hot and humid, with thunderheads looming on the horizon. Rain in the badlands is a problem…but lightening can be life-threatening. We only have a few more days to finish our site survey and remove a few obvious bones that might not make it through the harsh Dakotan winter. 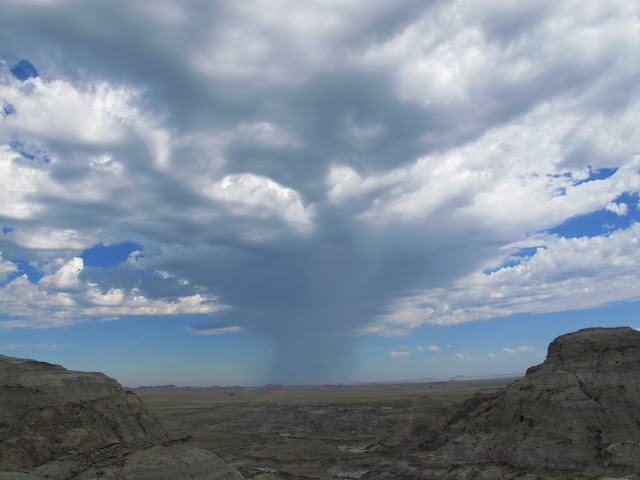 Today we had planned to extract a rather stunning bone, but the lightening storm slowly shifted over us and started to spot the dry dirt with rain. Usually we would turn tail and head for the field vehicle, but we took a gamble and hunkered down under a butte. Thankfully the storm passed over and we could head-off to get plastered. The single tibia that stuck proud of a channel sand had a stunning surface texture and a possible bite mark from a large predator. The removal procedure involved plaster, bandages, copious amounts of water and a bucket. Carl Mehling pointed out that we were reenacting a scene that has been played-out countless times in the Badlands. The temperature was rising at our site and Carl whipped-out his multipurpose tool to open the plaster bag to start the field-jacketing process. 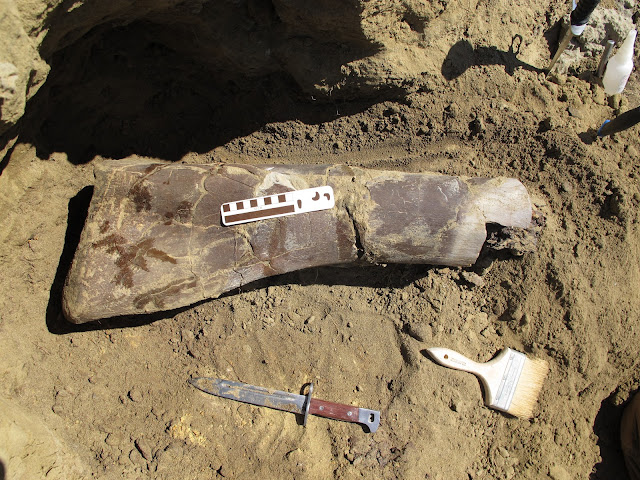 The bone we intended to collect still lay in the wall of the butte. The prior day we had completely exposed it, and identified it as being a large tibia from an Edmontosaurus. We had named the specimen Phindy, as both Jennifer Anne (aka Indy) and I had discovered the bone earlier in the week. Carl was clearly impressed by Phindy’s huge bone.

We soon got down to business and started encasing the bone in a field jacket for extraction. I checked that the initial bandage jacket had dried from the day before. It was nice and hard, so I could get to work on the bone. We mixed-up a batch of plaster, Carl pouring water into the bucket…as I poured plaster into the mix. The goopy mix soon started to get hot and I worked the mixture until it was nice and smooth, indicating it was nearly ready to smother the bone with. This outer jacket would provide the final protection for the bone for its long journey from the Badlands of South Dakota to New York City. 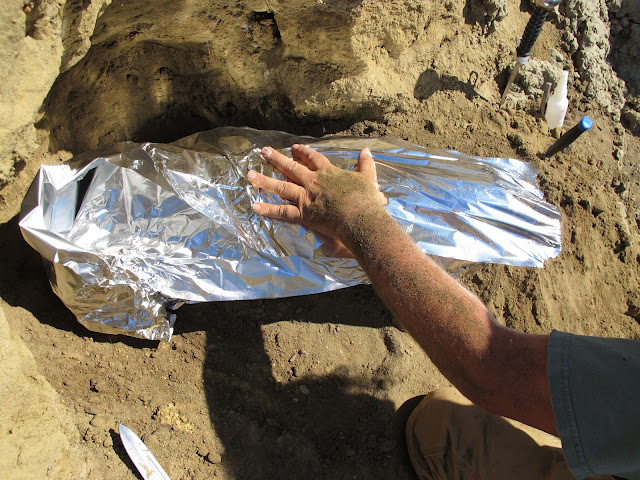 As I smoothed the mix over the shaft of the bone, Carl and Indy watched and offered ‘helpful’ words of encouragement….that might alter the rating of this blog so forgive there omission. The goop started getting hot, as the exothermic mix began to harden around the bone. I had to keep moving the mixture over the bone, keeping it smooth and even as it hardened. 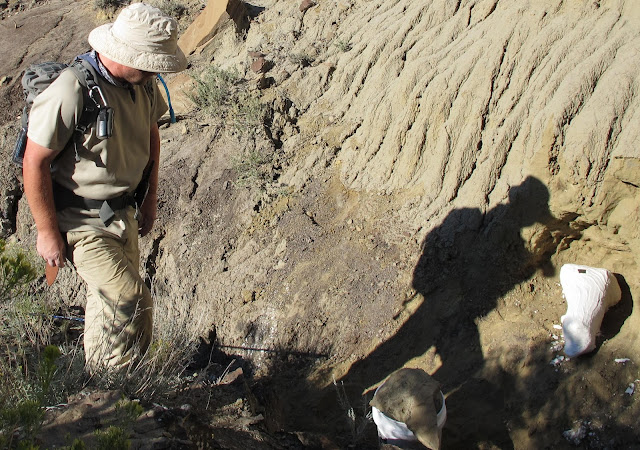 Tomorrow we will be able to safely remove this awesome bone from its 65 million year old Hell Creek tomb.
Posted by Phil Manning at 04:17