This past week I have been working between New York and Philadelphia, courtesy of the United Nations and Amtrak. The wonderful thing about being on the eastern seaboard is that public transport still exists. I recall asking where the nearest train station was when in darkest South Dakota, only to be met with a blank expression, with the suggestion that I look in the 19th Century for my nearest station. The great railroads of ‘Casey Jones’ seem to be a distant memory in the mid-west, creating a vast disconnect between much of the east and west of the USA. The wonderful thing about Philadelphia, it is slap bang between Washington DC and New York City, making many of my meetings, lectures and work a simple train ride via Amtrak. The train service is surprisingly clean, efficient and functional...three words rarely associated with public transport in the UK. Travelling by Amtrak is the closest I have come to an airline experience, firmly grounded on terra firma and without the dreaded turbulence! Its nice to think that volcanic ash would have a tough time delaying Amtrak.

My work at the UN entailed attending meetings regarding sustainability and the management of Earth’s resources…a sobering session! For the past two years I have be involved with the International Year of Planet Earth (IYPE), trying to help spread the word of sustainability and Earth resources to as wide an audience as possible. My part has been tiny, compared to that many working in the organization, especially Ed de Mulder who is currently pushing for a sustainable legacy from the IYPE, The Planet Earth Institute. One thing that never ceases to amaze me is how the education system has failed natural sciences, given our lack of understanding of the environment and resources that we so carelessly use and often abuse. I’m not one for getting on my ‘soap-box’ and preaching about how we should conduct our day to day lives, but when it comes to Earth resources, we tend to be as dumb as a piece of wood when ‘managing’ them. I have to admit that while the IYPE opened my eyes to the mismanagement of Earth resources, it also gave me hope that there is a band of folks out there working hard to bring about change….I step-down from my soap-box!

In Philadelphia I gave a quick presentation on ‘Deconstructing Dinosaurs’ at the Vet School this week. My talk was an attempt to reflect on the work of my colleagues and I, from the fields of palaeontology to the subatomic world of particle physics! The paper publish last Tuesday in PNAS took a very close look with 21st Century technology at an old bird, more than 150 million years old…Archaeopteryx. 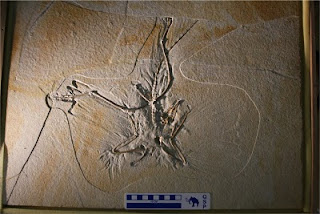 Archaeopteryx is often included by many palaeontologists in their Top 10 list of iconic fossils. The research undertaken in our study might breathe new life into these prehistoric bones, permitting us for the first time to map the chemical remains delicate structures, suc as the feather shafts. Finely detailed preservation of the composition of Archaeopteryx was shown in remarkable X-ray images that had never been recognized before. This was the same animal that helped ignite the debate on Darwin’s theory of evolution by Natural Selection. Half-bird (complete with feathers and wishbone) and half reptile (with teeth, wing-fingers tipped with claws and long bony tail), this fossil represents all that many think of as a ‘missing-link’ or a species frozen in time between two evolutionary steps. I paraphrased this to the press, suggesting it was as if someone had shoved a crocodile up the backside of a bird….I hate it when the press quote me verbatim! The techniques applied in our study will not only have implications for understanding more about this famous fossil, but all of ancient life. This application of 21st Century technology has allowed us to observe and map structures that up until now have been invisible. The implications for palaeontology, biology, forensics and many other fields are huge. 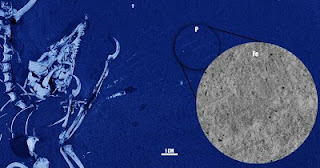 The collaborative research team, featuring scientists from the University of Manchester and the United States’ Stanford Synchrotron Radiation Lightsource, reported these new findings on the most complete existing specimens of Archaeopteryx. The said fossil was loaned for analysis from the Wyoming Dinosaur Center. Archaeopteryx are so very rare (only 10 specimens and a single feather have been discovered) but still they occupy a pivotal place in the development of Darwinian theory. Despite their importance, no comprehensive study of the chemistry of these fossils has ever been completed, until now :-) 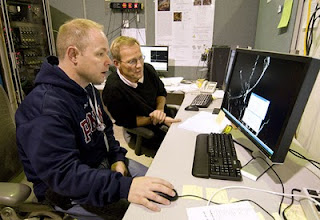 This research was able to complete this task by harnessing a state-of-the-art technique for the analysis of large specimens developed at the Stanford Linear Accelerator Center(SLAC) called Synchrotron Rapid Scanning - X-ray Fluorescence (SRS-XRF). Up until now, palaeontologists had thought that the critically important feathers visible in this fossil were simply impressions of 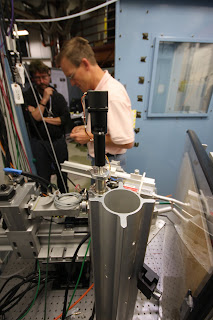 the feathers, with no original chemistry remaining. Using SRS-XRF to accurately map the locations of major and trace elements such as sulfur, phosphorous, copper, and zinc, our team discovered that traces of the original chemistry of the Archaeopteryx feathers were still present.

Other results showed that the chemistry of the bones from this 150 million year old bird relative were similar to the concentrations that one would find most living birds, providing a chemical link between this ancient organism and descendant species such as pigeons, parakeets, and seagulls. The sensitivity of this technique also revealed details of the curation history of the specimen, showing how small parts were “repaired” and were not original to the fossil itself. The new technique has the potential to unleash the secrets of chemical fossils locked in the sands of time, only visible to the x-ray vision provided by synchrotron light sources.

After such a busy week, I’m ready for a treat...my first ever baseball game! Tonight, weather permitting (gosh, this is so like the UK) I hope to see the Phillies take on the Pirates...I had no idea that sport could be such swashbuckling fun!